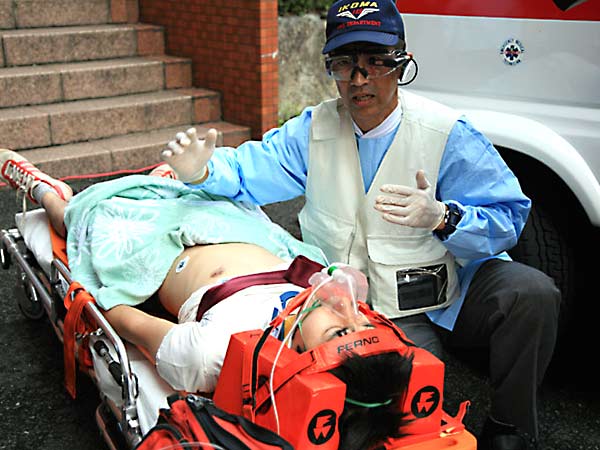 The proof of opening to the public experiment of the 4th of “Internet ambulance MobileER” in which the Ikoma City fire fighting headquarters was advancing development with Nara Institute of Science and Technology was conducted on October 3. In the proving test function to achieve communications that used the image and the voice from the wearable computer that rescue personnel had installed so far to the doctor of the receiver had been achieved.

The multicast type communication function was achieved as a function newly needed in a practical stage in this experiment, and smooth support functions from the stage where the acceptance hospital was decided were demonstrated. This time, the ambulance is enabled the dynamic scene delivery to two or more hospitals at the same time in the multicast type communication function newly added.

The system is making the wearable computer that each equipment and rescue personnel in the ambulance of the electrocardiogram etc. install can make a mobile router that supports Mobile IPv6(RFC3775) Network Mobility(RFC3963) set up in the ambulance a nucleus, and connected with the Internet.

The animation taken a picture of with rescue personnel wearable computers is transmitted to the computer of the doctor in the hospital of the receiver via the server of the fire fighting headquarters once. Moreover, the communications between the member and the doctor by the voice are supported, and it becomes possible to direct the action on the sick person from the doctor to the member while seeing the dynamic scene. If there is a computer that can use Web browser corresponding to the Adobe Flash reproduction, the equipment of the doctor side can use, and needs neither special hardware nor software.