Stepping forward with a spring in their stride market leader NTT DoCoMo introduced 18 new handsets for their Summer series at a presser here in the Prince hotel this week. Along with these latest models, which included the rumored HTC Magic Android unit, big D also announced a few interesting service additions. Of course WWJ was on the scene, slightly foggy from our MoMo Tokyo event the night before, and will post our thoughts – including link to video – for the paid members after the jump. Meanwhile, you can get a peek at the new offerings via their new flash website and the basic specs in English from official .pdfs with the original press release Here. 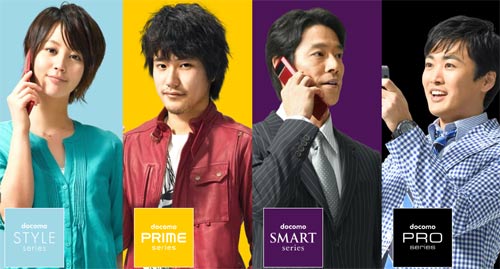 All things considered the performance was not that exciting compared to years past, we can’t be the only ones missing the good old days when Natsuno-san was the able and entertaining MC. Sure the hotel venue was nice, and they even did a tie-up with a cool branded anime device, but somehow it seemed to lack the sparkle of their former glory. It could be attributed to a combination of the ‘current economic climate’ and/or our ‘not easily wowed’ from years of attending these product launches, but then again maybe it really was just plain.. flat. Watch the entire presentation online video and decide for yourself. We’ll get our raw DV cut and ready to stream here asap!

Meanwhile, here is the gallery with all models offered in the STYLE, PRIME, SMART and PRO series.

Digging into the services side, there were a few notes of interest; the updated browser and adoption of full blown flash rendering with the ability to view streaming .FLV format, new i-Appli Touch functions and design push on the i-menu offering. The so-called “Cross You” SDK for combining Felica and Bluetooth and Voice input mail from ATR-Trek could both be a quiet killer apps while the PRIME series L-06A came out as the first model enabled with HSUPA up-link speed at 5.7MB (Note: every one of the new units is now at 3.5G with HSDPA enabling a theoretical 7.2MB down-link).

It was ‘interesting’ to hear the reply from Yamada-san during the Q&A session afterward on why they went with Android instead of iPhone; “open vs. closed”. You have to wonder in the end how many more devices it will take before there is any critical mass offering, therefore action from the domestic developers targeted at Japanese users, for this new platform. As there are other OS considerations with LiMO and Symbian fighting for market share so, for the time being, the potential for A’droid remains to be seen.

A better bet, they are waiting for the next-generation of iPhone to launch and it will be interesting to see if Apple engages wth a second vendor in this market. Everyone will be watching for how that develops later this year. Otherwise, The Toshiba SnapDragon device running Windows Mobile, which we saw at MWC in February, was on display and still running awful sloooow. Unfortunately for the helpful staff on hand who tried to run a demo for us, via Windows Mobile website which prompted him to download the Silverlight plugin, and crashed the device.. twice. The form factor is great but sadly in our experience, several times now, it’s more show than go. At any rate the main-scream media are all on about the 10 mega-pixel cameras on this latest batch, it will be interesting to compare image quality to a real digi-cam but.. well.. for the time being, that’s nice.

One of the other telling questions from the assembled media was how the handset line-up was actually not that much different from models on offer from the competition, and that perhaps the ODM’s are increasingly under pressure to streamline their design output to achieve some economies of scale. The respond was rather weak “customer services is our competitive advantage” – oh dear – and some cause for concern if you consider the end-game there is a race to the bottom on pricing which is clearly already underway. Otherwise, we just noticed while poking around the companies IR section that they released an updated Fact Book in early May with some interesting stats that might be useful, see the .PDF Here.