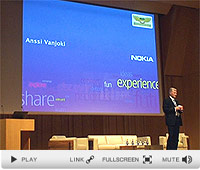 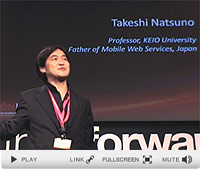 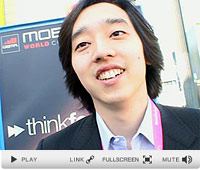 Hola – we are finally back in the groove here from our MWC adventure last month. The congress was chaos as usual this year with the predictable rush of news, presentations and evening event hopping. While attendence YoY was down, almost 50,000 players managed the annual trek and, like many, we made some fantastic connections. Yoroshiku!

Even though the main stage keynotes were, to be polite, ‘not valuable’ we were inspired by the opening address from Anssi Vonjoki at the Mobile Peer Awards. Indeed, these are the times when winners are built. Also of note, the Father of imode, and now professor at Keio University, Takeshi Natsuno gave a well-documented presentation titled Toward Global Evolution of the Mobile Industry. The opening remarks suggested that his comments might seem controversial and that since leaving DoCoMo last spring; “I am enjoying a happy life.. just because now I can say whatever I believe”. That 20-mins was far more insightful, especially considering the caliber of delegates attending, than all of the other CEO dog & pony shows we saw – combined. While on the topic of Japanese innovation, we bumped into Masahiro Ito from YAPPA, our interview with him last spring is Here, and got a quick demo of some of their latest UI offerings. The company apparently has major news coming later this month at the Game Developers Conference and were in Barcelona to promote the launch of their Spin UI Developers Network portal.

In summary we saw glimmers of hope, from the largest and smallest of companies, caught-up with exisiting clients while meeting some new prospects, had a blast at several of the mixer events and will never forget living like the locals for a week one-block off Las Ramblas. Now we look forward to attending CTIA in Las Vegas next month!