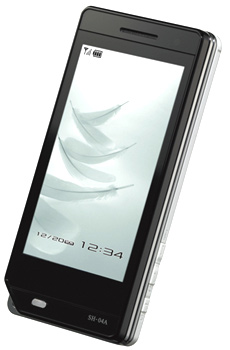 With all guns blazing market leader NTT DoCoMo took the wraps off their next-generation series of handsets at a press conference in Tokyo on Wednesday afternoon, watch the full event video (in English) and/or review the individual offerings via the press release . The company has officially marked it’s shift from the legacy lineup of mainly 90xi and 70xi series handsets – currently 906i and 706i – in an effort to achieve new growth, as was recently outlined. The introduction of a new, although still somewhat confusing, 0xA-series numbering scheme has models targeted at four main consumer segments.

With (hopefully) something for everyone bundled into this latest line-up, including the introduction of i-Conceirge and i-Widgets, the first wave starts hitting the store shelves in December with several models coming along in the first few months of 2009. Meanwhile, you can always check-out the fancy Flash Gallery for all the imagery. What a week, between the three main operators we have seen a total of 45 new handset models for the coming season!

Their STYLE series of ‘distinctive’ mobile phones are designed like accessories and offered in a wide variety of fashionable designs and colors for individuals who want to project the latest “look.” The PRIME models offer full-feature handsets for the maximum enjoyment of video, games and other entertainment by people who love to explore the latest multimedia while the so-called SMART series are sophisticated models for busy people who want to live productively and enhance the management of their professional and private lives. The PRO series includes advanced high-spec mobile phones for those who love cutting-edge digital tools and can’t get enough of the newest, hottest technology. Most notable looking at the Pro specs is that they all include GSM roaming along with Bluetooth and GPS functionality with the Sharp SH04A pictured here as the seeming pick of the litter running 1Seg digital TV, Flash 3.1 with a full browser and e-Wallet services with a huge touch-screen and sliding QWERTY keyboard.

i-concier lifestyle-assist service: Concierge-like assistance for timely, automatic provision and update of info according to the user’s individual preferences, pre-registered locations, etc. Animated icon on standby screen notifies user that info has been updated and then automatically adds the info to the scheduler, phonebook, etc.

Unified input and keys: Character input methods and key configurations are now standardized among most manufacturers.