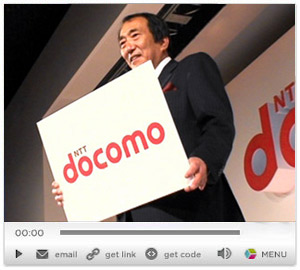 Masao Nakamura, President and CEO of NTT DoCoMo, made a presentation here recently to announce the companies new corporate identity, and more importantly strategy, will be ‘reborn’ after careful consideration of the ever evolving domestic mobile industry. He characterized the years past as a period defined by innovation driven tactics to gain new net subscribers and increase market share. However, with recent developments — including the impact of Mobile Number Portability, intense competition from new operators and the end of subsidized handset offerings — the environment has changed. Feeling that the DoCoMo “brand had diminished” and the company was “facing a crisis” Nakamura-san established (and led) the new branding division announced in August 2007.

On behalf of DoCoMo he pledged four commitments as the platform base:

Following those “Pillars” Nakamura-san stated that going forward the expectations of their existing subscribers will be given the highest priority. Together with special advisor Masahikko Uatoni, Chairman of Coca-Cola Japan, they began by reviewing market data and customer opinions to map a future roadmap, which clearly goes far beyond a new logo, for the company.

Some of the interesting quotes from the opening address include; they saw a “tide-change from an age lead by carriers to a new age lead by users where consumer demands have diversified and it’s becoming more difficult to achieve differentiation by technology”. The conclusion pointed to increased focus on handset designs, quality of networks, pricing and paying ‘meticulous attention’ to the individual needs of the users. Also, noted that they will consolidate some departments, the 8 regional partners are now merged into a single national entity for example, and he closed by saying – several times no less – that DoComo will change.

The opening line from Uatoni-san – video here – states that DoCoMo wanted to transform into more of a “marketing orientated” company. Considering some of the moves they had already made, clearly this (r)evolution has been coming for some time. He was also surprisingly candid, stating upon initial review it seemed “the company was obsessed with it’s past success” and noted a silo mentality, as a result of rapid growth, that needed to be resolved. Also, the disconnect (which has been standard operating procedure with all operators in Japan) of offering rewards to new subscribers which are not available to existing customers was clearly a factor that needed to be addressed. He went on to quote customer contact points — local shops, monthly bills and call center activity but oddly did not mention the obvious, a DoCoMo phone in some 53 million pockets! Going on our gut feelings at this early stage certainly DoCoMo should be congratulated for going ‘outside the box’ to get some perspective.

As we approach an end to the so-called ‘new subscriber war’ this shift represents a firm battle-line to address the predictable future issues of increasing customer churn. Increasingly the majority of these clients will be coming from the competition and lets face it, DoCoMo has the most customers to lose. We suspect this move to “re-focus on the core” also represents a valuable lesson for operators overseas. Just as DoCoMo lead the pack with i-mode, 3G and mobile commerce initiatives, it would be reasonable to expect that some years down the road incumbents in other regions will be facing some these same challenges.

It should be noted that putting a greater emphasis on customer service is easier said than done, especially as DoCoMo already has a well-established reputation for customer service. Also, obvious potential for the other operators to begin claiming the same, as KDDI already has (see page 6), will not exactly provide the edge of a clear technical advantage. So, as always, final results will be the only way to measure success or failure of this move. The promise to ‘listen to customers’ might well be tested, the migration to SoftBank Mobile over the last year – driven by aggressive pricing – should be loud and clear. Could we see DoCoMo move (albeit gingerly) towards matching the competitions rate packages?