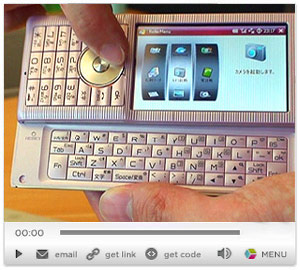 We sat down with Masahiro Ito, founder and CEO of YAPPA Corp., last week and were entirely impressed with both the product presentation and his charming ease when discussing the mobile industry. We managed to get a sneak preview of their so-called Spin UI Effect Engine [video here] and with the press release now public we’re thrilled to go live with this report. The company has an admirable list of top-tier clients, including the 3D Box UI on Sharps device for eMobile, and is growing beyond Japan with several offices overseas.

The UI ‘AQUATIC’ developed for WILLCOM has been designed taking the concept of the ocean, and by selecting the menu, the menu layers align itself with the layers of the ocean. Once the icon from the sea level layer is selected, the icon sinks down into the ocean to the second layer, and then moving down to the third layer. Spin UI enables seamless movement particularly when the icon drops downward. Additionally, users can trace the touch panel for screen transitioning delivering a unique interface.

Representing the next-generation of leaders coming out of Japan, Ito-san has led YAPPA on a storied adventure since founding the company 8-years ago while still in high school. His observations about entering the Japan market, the risks and rewards for growing overseas and future thoughts about where the mobile industry is headed were all bang-on. Watch the video.

We can’t help but be impressed and look forward to following this story over the coming years!