DoCoMo Strikes Back with 905i-Series 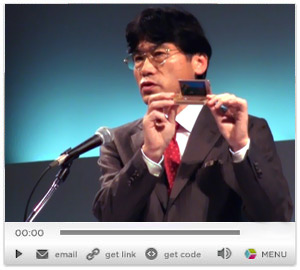 Domestic market incumbant NTT DoCoMo came out with all guns blazing during their press conference at the Grand Park Hyatt in Tokyo on November 1st. For the first time ever they combined the launch for both of their upcoming 700 and 900 series models – a record 23 handsets unveiled at once – and the announcement included several new service offerings as well. Marking another notable difference from previous line-up introductions was the absence of Natsuno-san, famed ‘father of i-mode’ and always energetic MC, from the stage.

The new 705i-series models include several interesting exceptions to what has been generally considered in the past to be a lower-end offering. For starters the L705iX (aka Shine) will take advantage of the next-gen. network offering a potential down-link speed of 7.2Mbps and both the P705i by Panasonic and the N705i from NEC will ship with full spec. features of the top-tier 905i handsets. While only 3 of the models have GSM roaming, all of the domestic makers offer the 2in1 sim, DCMX payments, GPS appli, Mega Games, i- motion video and biometric security functionality.

The staggered release schedule announced indicates that we will see the 905i-series start shipping later this month with several designs, including the Cyber-Shot and Viera, coming in early 2008. The 705i models on display, which were all mock-ups, will not start rolling-out until January with the above mentioned L705iX expected sometime in February or March. WWJ Subscribers login for more details and our full 30-minute video program.

For your easy reference here are links to images, services and model specifications for the two new line- ups:

While not all 10 of the 905is’ are in fact created equal, this is certainly the most full-featured offering we have seen from any operator to date. In the past, new models usually shipped with certain desirable features, but none of the choices had all of the available functions combined into one device. Keen viewers might have noticed the “All In” byline from DoCoMo’s presentation which indicates their desire to overcome the nagging device/service fragmentation we have seen. Also, all of the models in this latest batch have one significant ubiquitous offering — HSDPA — which would seem to signal the beginning of a planned customer migration to their next-generation 3.5G network.

Notable device specific offerings include an industry first “Dolby Mobile” on Sharps SH905, the 5.2-Mpixel camera on NEC’s N905 and the new “W Open Style” hinge for 2-way open on the P905 clamshell from Panasonic. Also of interest was the new Cyber-Shot from Sony Ericsson, complete with multi-face sensing, the Vera model – P905iTV – also from Panasonic with a 3.5-inch screen and the SH905iTV from Sharp with it’s 2,000:1 contrast AQUOS designed LCD panel.

The 705i’s on offer contain several features in the “world first” category. The 705iμ (mew) models from NEC and Panasonic both measure in at 9.8mm thin making them the slimmest (as of the announcement date) 3G handsets available anywhere, while the Panasonic P705i – 12.8mm – also claims the most svelt title for a 1Seg digital-tv model and the F705i from Fujitsu claims the thinnest water-proof model at 13. 8mm. Clearly a key feature of this series is ultra-slim..

On the new services side we note, with obvious interest, the long awaited dual-mode GSM roaming function complete with voice-activated translation. A server side platform – which may prove to be rather expensive while overseas – the system offers voice-to-text exchange between English, Chinese and Japanese. We managed to get a quick demo of this product during the touch & try session (it was a long line-up) and it certainly seemed ‘usable’. The disaster services early warning system, for severe weather and impending earthquakes utilizing a cell broadcast system, was also popular with the assembled press – company video Here – and we expect to see even more rich-media offerings making use of Adobes new Flash Lite 3 application which will be available on all but a few of the 705i’s.

As mentioned above the only major missing element was Natsuno-san, when we asked PR about his absense they mentioned (something to the effect) it was due to the fact that “today we will introduce new services as well as the latest handset line-up…” which does not pass mustard with us. Natsuno has introduced new services along with upcoming handset line-ups, from the 701i-series with i- Channel to the 904i-series this spring with the new 2.0 campaign. He was also the host for DoCoMo’s high-profile introduction of DCMX and is far more media savvy, no disrespect to DoCoMo’s EVP Kiyoyuki Tsujimura, when it comes to making presentations and handling the Q&A. Simply put, for Natsuno to not be front and center at such an important event is ‘a sign’. Rumor has it that he is pursuing academic interests and we will remain keen to see how his public profile with the company evolves.

Meanwhile, the proof will be coming via TCA stats over the next few months, but it would be fair to expect this new and improved DoCoMo 2.0 offering will help big D turn the corner on their ‘somewhat disappointing’ performance this year. To be fair, even though the company has seen in excess of 1M subscribers (appox. 2%) churn-out since number portability went into effect 12 months ago, it certainly could have been – as predicted by many – much worse.