The CIAJ has released their annual Telecommunication Equipment Production and Trade Figures report covering fiscal 2006. The total value of production was pegged posting 2.589 billion yen, down 5.7%, slipping back to negative growth for the fiscal year. Growth categories include wireless network equipment at 212.7 million yen, up 1.2% over the previous year, of which fixed telecommunication devices accounted for 125.6 million yen an increase of 5.6% YoY. Wireline parts posted 19.1 billion yen which reflects a positive growth of 8.5% compared to fiscal 2005. 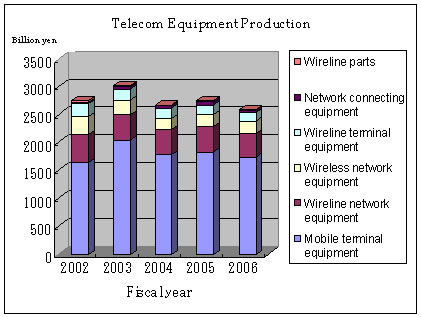 – Mobile terminal equipment 1.735 trillion yen down 5%, of which cellular phones accounted for 1.633 trillion yen or negative growth of 4.7% over the previous year.

– Negative figures for public-use PHS reflected a back-lash from the steep growth the previous year.

– The market itself for wireline terminal equipment shrank, pulling down the equipment figures down as well, but intercoms accounted for 53.7 billion yen — up 6.6% over the previous year — showing healthy growth.