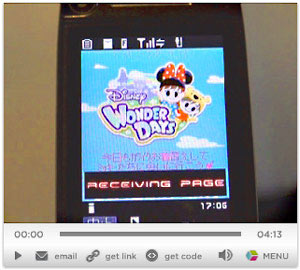 We’re thrilled to see Walt Disney Japan step into the mobile social networking space in March with this announcement [in Japanese only] for their public launch — on all three carriers’ official portals — of Wonder Days. In the most simple terms it looks very much like Habbo Hotel meets Mickey Mouse; however you need not take our word for it… watch WWJ’s first-to-web video demo and see for yourself!

It’s no surprise that many of the popular and established fixed-line service offerings have been making the leap onto Japan’s wireless web. Tokyo-based DeNA has several perfect examples for auctions and social networking with Mobaoku and Mobagatown, respectively. Moba (game) Town is a free service, and available only on mobile, which has attracted just over 3 million members since it’s launch last summer. The hook was to provide free games, with over 30 titles to choose from, supported by advertising and micro-purchases — using MobaGold — for premium avatars. In the same way that instant messaging and ‘presence of friends’ applies to online products (like the Twitter craze), it’s easy to see that the evolution of mobile communities connecting anywhere and anytime will become a de facto standard.

While Disney’s other efforts in the mobile space do tend to make the news, it’s somewhat surprising that this development has not been picked up anywhere else — Google it — that we could easily find. Perhaps the combination of Flash and Japanese-only text might have something to do with that. Despite the fact this is early days, and it will take at least a few months to see what kind of user uptake they get, it’s pretty safe to say this will become more widely known by the end of fiscal 2007.

We’ll try to get some feedback from the folks at HQ in Meguro now that this story is (hopefully) going to get some attention on the English web and will provide a more detailed follow-on report. Considering Disney’s well-established i-mode base, we guess this new offering will attract plenty of activity and should help them develop the product for eventual deployment in overseas markets.