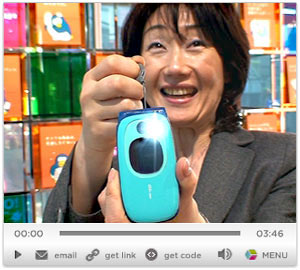 I was talking to my accountant last week; she’s a smart, self-employed mid-career professional with a husband and kids and she’s definitely one of the more practical-minded Europeans I know. We were talking about ‘handys’ (keitai, in Germany), and I told her about the huge success the mobile Internet and 3G are having (still) in Japan, versus the perception in Europe that no one’s making a single (Euro) cent on UMTS. Her reaction was typical, but interesting: “I’m not going to use the phone for sending mail or anything but talking. The keypad is far too tiny. It’s just not in the mindset of my generation.”

Interestingly, she added: “Perhaps if our kids started using them [data-enabled mobile phones] early, they’d grow up thinking about using it for all that mail and stuff. I’d buy a data handy for my daughter…” I jumped right in, and told her “that’s exactly what’s happening in Japan.” Of course, Wireless Watchers like the smart readers of this newsletter know that the success factors behind mobile usage didn’t (and don’t) depend on youth growing up with i-mode. But it does look like carriers and handset makers are finally setting their sights on parents who are willing to equip their offspring with kiddy-custom keitai.

WWJ thinks that, despite D’s and SB’s similar products, AU has hit the nail on the head, recognizing that selling mobiles to kids is more than just a battle to convince the kids to like ‘em – you’ve also got to get the (bill-paying) oya on side. We think Mom and dad will like these new KDDI models because of the waay-cool GPS-based location tracking/monitoring service, allowing a parent to see where their keitai-carrying kids are at any time, in real time. Further, KDDI at least allow the kids to have a phone that doesn’t have “kodomo” plastered on the front bezel, like Softbank’s (could anything be less cool to your average 12-year-old?).

Last month, Tomi Ahonen, one of WWJ’s favorite mobile thinkers (he’s also an outside advisor to WWJ’s parent company Mobikyo KK), was in Tokyo for the Marcus Evans 3G Global Forum event. WWJ Digital Media Director Lawrence Cosh-Ishii caught up with Tomi for an insightful video interview, and mentioned the new Kodomo phones. “I didn’t tell Tomi why I wanted to run him down to KDDI Designing Studio, but we id make sure to get him a hands-on demo for the kids’ phone; he was so impressed that he made it part of his presentation at the 3G conference the next day,” says Lawrence. Tomi also commented on these phones Here.

As Tomi said:
“Now it only takes some time for this innovation to spread around the world. I think KDDI has approximately half a year head-start until its local rivals release similar services and phones.”

The point is, all carriers in Japan recognize that childrens’ phones is a highly lucrative segment that has until now been under exploited, primarily due to fears of packet-billing issues as well as security and safety concerns. But now, KDDI offer great GPS tracking (as do all three carriers), DoCoMo’s kids’ phone has a built-in 100-decibel alarm, and Softbank offer child-pleasing colors and a cool form factor. They’ve finally got a great mix, a well-thought-out product and an extremely eager customer base.

And whether the parents intend it or not, the current crop of pre-teens will grow up exactly as my accountant thinks they will – as the heaviest mobile Internet users ever. The carriers’ profit counters are sleeping very well this season.