Year of the Pig Shaping up as Golden

Actually, 2007 promises to be far more interesting than even that cheeky title! Here goes our official WWJ Fearless Forecast for 2007 – all in one – huge – breath! 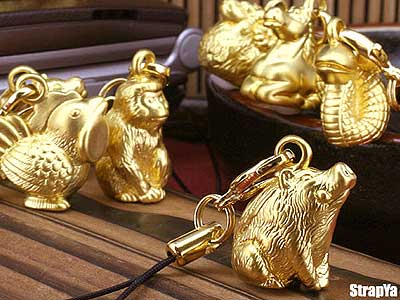 M-commerce
The carriers’ FeliCa-based services will continue to grab serious market share. At the end of 2006, DoCoMo had over 1 mn customers for their DCMX mobile credit-card service alone, not to mention the 18.3 mn regular FeliCa handsets in use as of 31 December. KDDI and SoftBank have FeliCa user bases in the millions as well. Most significantly, look for DoCoMo to push DCMX as a platform for other consumer-facing brand owners. In other words, anyone can become a credit-card issuer and use the platform to provide their own-branded CC. Who cares if the carrier is only making a small percentage of each transaction when the volume of transactions – and the fees billed to third-party brands – are essentially unlimited.

Also: watch for the non-financial FeliCa apps to open up this year. Third-party developers for ID, physical access, loyalty point cards and many other consumer uses will definitely try to piggy-back on the growing mass-market usage.

Digi TV
Mobile digital TV will continue to generate a huge amount of interest from service providers, broadcasters and – finally – advertisers; in 2008, the government will allow mobile-specific adverts and campaigns and there will be a lot of testing this year to be ready. Of course, ad delivery via mobile as well as polling, surveys and other forms of quasi-marketing feedback are already in full swing.

DigiTV-enabled handset numbers are already in the millions with virtually all of the end-2006 models supporting “1 Seg” digital TV reception. WWJ’s Digital Media Director Lawrence Cosh-Ishii bumped into a senior industry insider the other day and chatted a bit about the new spectrum to be granted for digital broadcasting. The allotment should come in June 2007, and it seems that supporters of 1 Seg and Qualcomm’s MediaFlo are in full-tilt lobby mode to get access to the new bandwidth.

Say what you will about MediaFlo, and we recognize that DoCoMo are unlikely to support it, but it does offer a cheap and easy way for all those local TV broadcasters out in Japan’s inaka countryside to become digiTV ‘casters just like the Big Parent b’casters in central Tokyo.

Oh – and don’t forget about the **new** 3G carriers who will be tripping over themselves to offer mobile TV services. For example, IP Mobile’s portable TD-CDMA modem connects with the network – kinda like carrying a DSL router in your pocket – and enables downstream connection via WiFi to any device (laptop, PDA, handset, etc.). Bill Gates’ comment that the “Web will replace TV in five years” will happen first in Japan, starting in 2007.

Handsets
The only thing we can predict for certain is: massive change! Where do we start… Here’s one excellent example: We are particularly interested in KDDI’s new kodomo-series of handsets for kids. KDDI’s Designing Studio had a bunch – dubbed ‘Junior Handsets’ – on display last week on the second floor; these are actually pretty cool for the pre-teen set as (angel) Mom will actually buy them due to the built-in GPS location-sensing features (Mom & Dad can log in and see where junior is at any time; they can even command the cam to snap a picture) and (b) there’s nothing like locking ‘em in when they’re young!

(Note not much online yet for the newest model; but KDDI do give details – in English – on the previous version here. And remember: GPS is mandated for all new handsets starting 1 April!). Oh – and note that SoftBank have recently jumped on the kiddy wagon with their new 812T unit [.pdf in Japanese].

And you needn’t take our word for how innovative the thinking actually is behind these children’s phones. We escorted well-known telecoms author, consultant and all-round very smart thinker Tomi Ahonen (an outside advisor to WWJ’s parent company Mobikyo KK) to Harajuku’s KDDI Designing Studio last week while he was in Tokyo for the Marcus Evans annual 3G Forum (our latest video interview with Tomi is here). He, too, was blown away by the handsets and service model and mentioned them both on his blog and in his presentation at the event the following day (we’ll post a video program with full hands-on demo of the kodomo keitai soon).

“China’s mobile phone market is one of the most promising and fastest growing in the world, but Japanese handset makers have been largely shut-out. In 2005 and 2006 alone, four major Japanese mobile phone brands exited the China market. This is not what one would expect from a technology and consumer electronics powerhouse such as Japan.“

The story reports that “Most Japanese handset companies have ….. relied too much on R&D and phone quality, and invested too little in branding, advertising, and developing sales channels. They’ve also failed to introduce enough models at a broad range of price points that appeal to cost-sensitive Chinese consumers. Also, the design preferences of Chinese consumers generally work to the advantage of South Korean brands, and to the disadvantage of Japanese brands.”

Our own observations are similarly stark.

We expect 2007 will see more consolidation among Japanese device makers as they hit 2006 fiscal year-end (March 2007) and try to figure out what to do about all the red ink. This market cannot really hope to continue supporting 12 handset makers – especially in the face of increasing entry competition from foreign makers – unless and until they start selling their lovingly hand-crafted high-end models overseas as well as domestically – and band together to achieve some economy of scale.

Of course, the problem is not unique to Japanese makers and, clearly, the foreign brands need Japan just as much. Perhaps the now-very successful SonyEricsson JV is the model for the way forward?
Also see: “Korean Mobile Phone Makers Under Siege“.

In fact, we’ve already seen the first wave of the future in 2006 with Sanyo and Nokia almost coming together, and, also, with the NEC, Panasonic and Texas Instruments tie-up announcement.

With the Japanese makers failing in China, flailing at home and having their o-bento lunches handed to them by the likes of Korean, US, European and even – for gawd’s sake – Canadian device makers, it could be a grim year for them.

In 2007, we’ll watch – and hope – that Japanese makers start taking advantage of their advanced designs, experience with embedded – and now becoming global standard – 3G chipsets and service technologies like TV, payments and GPS.

And speaking of innovation…
So does that mean we’re sour on Japan? Chigau-n-yo! Not in the least!

As this post (“Mobile Phone Mall In Japan and why the Apple iPhone is far..far behind“) on Digg.com mentions: “Video showcasing the biggest phone mall in Japan, showcasing mobile kiosks which are so interactive compared to what we have in the USA. Possibly the world’s coolest phone shop ever. Eat your heart out Steve Jobs!”

Well.. Ahem.. That ‘new’ Digg.com link merely points to a WWJ video report by Gail Nakada, from March 2005, recently ripped and posted on YouTube.. BTW: those jerks require **written** complaints for any allegations of copyright violation – How very analog of them – but I digress…

In other words, even two years ago, we were telling and showing you exactly how far ahead Japan’s mobile market was.. and it still is.

And why is Japan so far ahead?

In 2007, Japan’s mobile market will continue to be driven by competition – something which the GSM world, for one, doesn’t have enough of.

How intense? Here is a brief extract from Keiran Calder’s report to investors (he’s an investment analyst) from earlier this month:

On Friday, SoftBank Mobile announced a new mobile plan priced at Y980/month. Combined with a stronger handset line-up and improving network coverage, we expect that Softbank’s low-price strategy will soon begin to impact its competitors.

SoftBank Mobile’s Masayoshi Son announced a new price plan to replace the Y2,880 Gold Plan that runs out on January 15th. The new White Plan offers free on-net calls until 9pm and free on-net email for total Y980 per month. Son reiterated his pledge to offer the lowest priced mobile service in the market, promising to top any counter offer within 24 hours.

But, contrary to this conventional wisdom, Calder adds: “Our proprietary subscriber survey found that price is an important criteria in choosing mobile service. As the lowest price operator, we expect that SoftBank will prove more of a threat to DoCoMo and KDDI after improvements in coverage and handsets, which were weaknesses when Vodafone was managing this business. And improvements are coming quickly.”

In short, Japanese mobile consumers are really actually quite a lot like their price-sensitive counterparts in Europe, North America and elsewhere. Japan’s big advantage is that this country has much smarter carriers competing for consumers’ wallets.

Those elsewhere should be so lucky…

PS: A quick comment on WWJ – We’ve got a radical rebuild of the site in progress, so you may notice a teensy fewer postings in the next couple of weeks as we migrate to the new server, a new content management system and a whole new look and feel – our first major upgrade in… waaay too long.