Osaka-based Dorga Ltd.has announced their Time Machine Navi application which displays historic scenery according to the position and the direction of an enabled cellphone screen. The sample site, Ruins of Heijo Palace in Nara, was unveiled in the final report of the ‘Intellectual Cluster Creation Business’ that the Ministry of Education, Culture, Sports, Science and Technology creation has been funding since 2002. 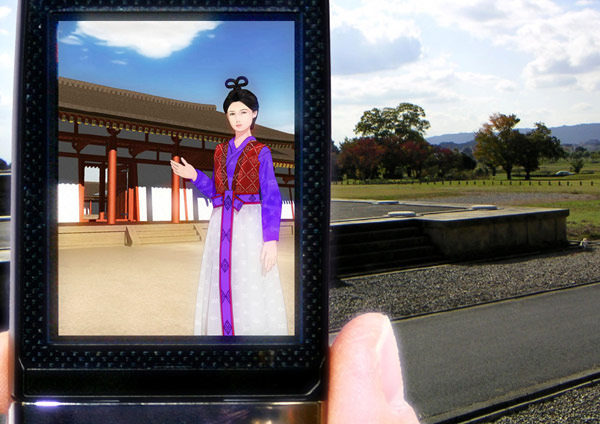 According to the machine translation from this this article:

“User’s standing position and a historical spectacle corresponding to the direction are displayed by using the GPS function etc. for the screen of the cellular phone. Only the model that installed GPS electron giro function by SoftBank.” [Perhaps the V603SH -- Eds]

“It was established as joint research project “DoGA” such as Osaka University computer club — Kyoto University Micro Computer Club in 1985, and the activity support of DoGA was established in Dorga in the purpose by locating the subsidiary company in April, 1993. The capital 10 million yen. The number of regular members is six people.”