Japan's mobile carriers aren't in turmoil -- not so far, anyway. But Mobile Number Portability (MNP) has brought the nearest thing yet to a consumer-facing market meltdown, and the No. 1 Agent of Change is undoubtedly Masayoshi Son's SoftBank Mobile.

The media, industry analysts and Japan Wireless Watchers everywhere have been hit with two sets of numbers in the past fortnight: the initial, media-and-analysts-only post-MNP subscriber churn numbers released on 31 October (one week after MNP start) by NTT DoCoMo and KDDI (SoftBank Mobile was silent), followed by the regular monthly release of overall subscriber numbers issued on 8 November by the TCA Telecommunications Carriers Association; keep in mind that the TCA release is based on self-reporting from the carriers). 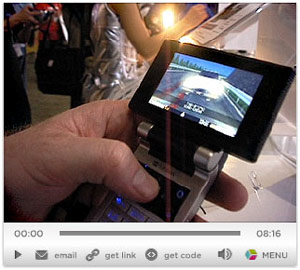 It's been a fairly hectic six weeks for Japan's mobile industry and therefore also for us here at WWJ. Starting with the Tokyo Game Show in late September, followed in short order by CEATEC and DoCoMo's new 903i-series launch -- and combined with the MNP (mobile number portability) official launch on 24 October -- it's been crazy. Your WWJ staff have also

The CDMA Development Group (CDG) has reported that KDDI is strengthening its technological and differentiated services lead in Japan by upgrading its CDMA network to so-called Revision A. Rev A's most compelling benefit will be a dramatic increase in uplink speeds up to 1.8 Mbps and downlink speeds up to 3.1 Mbps, as compared to EV-DO Release 0 that supports speeds up to 153.6 kbps and 2.4Mbps, respectively. KDDI has already announced the availability of two handsets from Toshiba, the W47T and DRAPE, to support the commercial launch of its advanced broadband technology services by December 2006.

Japan's antitrust watchdog has told Qualcomm Inc.'s Japanese subsidiary that it may investigate its licensing and chip business practices in Japan, Qualcomm said on Thursday, sending its shares down more than 3 percent. The news comes after sources said last week that the European Commission is likely to intensify its investigation of Qualcomm's patent licensing rates for a new generation of mobile phone technology. Japan's Fair Trade Commission did not say when it might investigate the company or identify any complainant, Qualcomm said.

Aplix has announced that it reached a licensing agreement with NEC Corp. and Panasonic Mobile Communications on MOAP to offer integrated solutions for Linux-based mobile phones. The license allows Aplix to design and develop software solutions for mobile phones using the MOAP Linux platform co-developed by NEC, Panasonic Mobile and NTT DoCoMo, and to sublicense this technology to other handset manufacturers.

KDDI Corp. appears to have benefited the most from the mobile phone number portability service introduced Oct. 24 to allow people to switch phone companies without changing their numbers. KDDI said Wednesday that it had a net 200,500 new subscribers in October, market leader DoCoMo saw its subscribers increase by only 40,800 while Softbank Mobile said its subscribers increased by 23,800.

Japan mobile industry watchers are awaiting the official October stats from the Telecom Carriers Assoc. (TCA) to be posted this week. Considering the figures already announced by both DoCoMo and KDDI at the end of October it would seem that mobile number portability has - as predicted - provided KDDI the most benefit so far. However, after a quick calculation based on the information already available, SoftBank Mobile may well be in the news as a result of what would appear to be rather 'disappointing' numbers.

MySpace to launch in Japan with Softbank

joint venture with Japanese Internet and telecoms group Softbank Corp. The 50-50 venture, to be called MySpace Japan, will first offer services for personal computers and will eventually allow users to post photos and write blogs via mobile phones. The firms are expected to announce the deal as early as this week after a meeting between News Corp. Chairman and Chief Executive Officer Rupert Murdoch and Softbank CEO Masayoshi Son. The Japanese version of MySpace is live here however there is still no official announcement from Softbank. [Update: it's official -- Eds]

Napster has announced the launch of Napster Mobile on iMode. DoCoMo is now promoting Napster Mobile, with over-the-air full length songs and ringtones and the Napster To Go PC-to-handset sideloading capabilities through a multi-million dollar integrated marketing campaign comprised of TV, outdoor, print, in-box, online and on-deck promotion. The campaign also includes today's platform-wide takeover of iMode by Napster. DoCoMo customers can use Napster Mobile to access full-length songs and ringtones that can be delivered over-the-air (OTA), directly to their mobile handset for immediate listening and downloading.
« First‹ Previous2345678910Next ›Last »