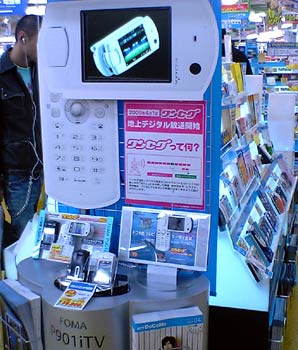 A recent report focusing on the faltering Korean DVB-H market lead us to wonder how the user experience, and business model, compares with the service launched here in Japan on April 1st. Several items stand out as either very similar or completely opposite.

Many studies over the years point to the fact that mobile user habits vary much less from region to region than assumed by most industry pundits. Of course there are at least some notable differences, however – by and large – people are people, and in-depth research has routinely shown common ground across cultures and classes.

The predictable differences become more apparent as business models are implemented that encourage, or restrict, access or behavior in any given product or service offering. The cost and availability – let alone need – of any new mobile initiative will obviously have an impact on its adoption rate.

When digital TV for mobile (1SDB-T) debuted here this spring, the business model had several notable features: all channels are free to view and the broadcast content is exactly the same as already available – also at no cost – on users’ home TV sets.

While many have questioned the logic of this seemingly non-profit (yet costly) experiment, the ministry, carriers and broadcasters have carefully developed a strategic long-term vision for the successful deployment of mobile TV in Japan.

One thing is for sure: the hype surrounding this next-gen area knows no borders and markets overseas are also struggling with the myths and realities of this segment’s risks and opportunities.

Broadcasters and telcos are anxious to explore the revenue possibilities mobile digital TV provides. Both content owners and advertisers can use television feeds with hot links right on the cell-phone screen (the UI is split with the upper portion for viewing and the lower for data links) to drive program interest, audience participation and, of course, impulse buying via onboard mobile commerce functions like DCMX.

The digital image quality and selection of 1-Seg-enabled handsets already deployed indicates a concentrated effort on behalf of the industry’s desire to monetize existing content and networks through this new channel. By seeding the offer with low-cost phones and free regular programming, while adding value-added services such as interactivity and m-commerce options, this clearly indicates their determination to prove the model.

Of course usage patterns, like mail and even voice, will differ in the mobile environment. The industry expects current regulations regarding content to shift in 2008; it is predictable that targeted (read: shorter and searchable) custom programming will be developed and made available at that time. We also expect to see Qualcomm’s MediaFLO offer its subscription driven platform launch here with a much wider range of broadcasters (many of whom are currently locked-out of the digital TV).

There is no reason why television, in a customized form, cannot successfully migrate – in the same way other contents and services such as mail, music and gaming have – to the mobile space. While a significant challenge remains on the power consumption side (we have seen several efforts address this issue), perhaps the greatest barrier to mass adoption will be the business model. As we have stated time and again, the key difference in Japan is not end-user culture but business culture (the patience and attention to detail) when it comes to designing and deploying new product offerings.