This past week, WWJ’s own Lawrence Cosh-Ishii, our hard-working director of digital media (and pretty much everything else in our humble shop), appeared on US Web radio program "Into Tomorrow," hosted by Dave Graveline. Dave and his crew pop over to Tokyo each year for the annual CEATEC consumer tech show, and he makes it his business to hook up with a slate of guests who can provide insidery gen on what’s happening in Japan. 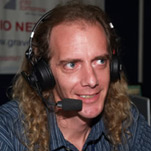 The "Into Tomorrow" team were also over for last year’s CEATEC, and their coverage is getting better. This year, in addition to our own Lawrence, the three-hour CEATEC audiocast included guests from E-Gear Magazine, Toshiba, Bose, JEITA (Japan Electronics and Information Technology Industries Association), Maxell, Fujitsu, Pioneer, NEC and others.

We’ve said it before: Japan is the world’s high-tech testbed for a wide range of consumer electronic devices and systems – many of which never see the light of day in overseas markets – and keeping up with developments here is vital to knowing what’s going to hit Europe and the US 24 months in the future; doubly so with respect to mobile and wireless.

Dave’s a big fan of WWJ, so we like him!

More Details on DoCoMo FOMA 903i

Speaking of high-tech in Japan, there are more details available in English on the FOMA 903i-series announced yesterday by DoCoMo. The 903i-series includes a stunning 11 handsets, plus there was the N902iL (the second dualmode 3G/WLAN model) and the new ‘Simpure’ models; two ultra-simple, no-tech models that feature roaming or just voice and mail. 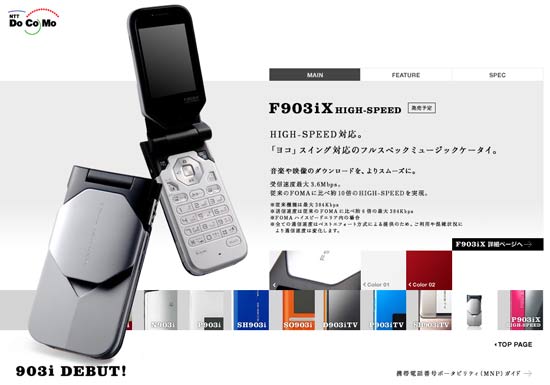 The total of 14 models announced possibly represents a record one-time roll-out for Big D, who is obviously feeling the heat as mobile number portability looms in just a few days. (We’ll have a full video report online asap.)

Several very interesting features announced at the DoCoMo presser for the 903i line-up:

We got the press release issued this week via JCN (see "Mobile Intelligence Japan 2006: Meet Mobile Opportunity Face-to-Face in Tokyo"). It’s nice to see that Google, Yahoo and NASDAQ have already linked to it.

The formal theme will be "advanced networks, devices and applications," and we are planning to include:

The MIJ keyword cloud includes: FOMA, 3G, 3.5G, Super 3G, FeliCa, QR Codes, e-wallet, usage, usability, and many other topics that we regularly report on at WWJ. During MIJ, one of the highlights will also be attendance at Mobile Monday; the 13 November event is shaping up to be one of the year’s best with highlight presentations from one of Japan’s newest mobile technology players and from one of the country’s foremost mobile marketing/usability thinkers.

If you’d like more details, including a sample agenda, outline of companies to be visited, the executive summary and the registration form, please access: http://www.mobileintelligence.jp.

Please register NO LATER THAN 23 October!

Have a great weekend!