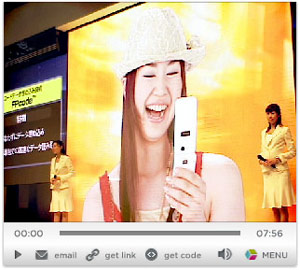 Organizers said that the consumer electronics event drew 550,732 during the public days, 4-7 October, while WWJ ducked in out of the torrential rain during the press & industry day on 3 October, when the crowds weren’t quite as waku (wild).

WWJ thinks the FP codes (essentially, invisible barcodes) and audio QR technology stands a pretty good chance of fast adoption, given the masses of rabid advertising agencies out there trying to capitalize on the growing popularity of (a) camera phones that grab info via QR code and (b) digital broadcasting. An audio QR code is simply broadcast as metadata in a digital audio signal, such that the browser displays text, a clickable URL or other advertising message while you listen to a radio or tv program on a suitably enabled mobile phone. But for sheer outdoor-advertising-meets-mobile marketing genius, the UB Wall can’t be beat! (WWJ subscribers log in for more details and links.)

Fujitsu – UB Wall
The Tokyo metropolis hosts uncountable open public spaces, plazas and shopping concourses, not to mention massive public transportation infrastructure, all of which provides multiple opportunities to plaster up outdoor ads, signs and posters. Fujitsu have not failed to notice that a better use for all that advertising real estate would be to make the signs electronic, changeable in real-time and customized towards whomever happens to be passing by.

The UB Wall is a large vertically mounted display that can react to a pedestrian’s touch commands or to an RFID-equipped device. Specifically – and here’s the mobile angle – the Ubi Wall has a FeliCa reader that can sense the the onboard FeliCa chip and provide customized information (DoCoMo said last month 15.5 mn enabled handsets are in use; plus there are more with KDDI and SoftBank Mobile). Using FeliCa, the Ubi Wall can deliver a coupon or other marketing or advertising info; it could also deliver local area information, traffic data or airport/terminal information, for example.

Given the number of FeliCa-enabled phones in use, this looks like a savvy attempt to match empty wall space to sales-generating mobile users. The device went on sale in August 2006, and Fujitsu hope to sell 300 of them per year.

Fujitsu – FP Code
With Fujitsu’s new FP (Fine Picture) code technology, the traditional 2D bar code image ‘disappears’ and is replaced by an invisible code, which can be read by a cell phone camera. This seems to be a simple, yet neat extension of the already hugely popular Quick Response 2D barcodes adopted by all carriers in Japan. With traditional QR codes, you use the phone’s camera to image a code, which then is interpreted by a Java or BREW app that, typically, pops the browser at a specific mobile website. But of course, the not-so-handsome 2D code image must appear somewhere near the thing being advertised.

In contrast, an FP code consists of thin yellow lines that can’t be seen by humans; the code can include all the same info that a 2D barcode can, such as a URL, item description, marketing info, price, etc. To use an FP code, you simply take a picture of the product (typically printed in a catalog, etc.) and the phone will interpret the code – WWJ guesses one trick will be to make sure people know there is a code embedded in the image.

WWJ saw the genesis of both Fujitsu technologies above at the Fujitsu Solution Forum event in 2004:
http://www.wirelesswatch.jp/modules.php?name=News&file=article&sid=816

DoCoMo – FOMA Drunk Driver Detector
We hear you giggling, but this is actually a pretty sensible idea. For bus lines, trucking firms and construction companies, among others, liability and litigation – even here in the supposedly non-confrontational Land of Wa – is a huge issue.

The new system, which uses a DoCoMo 3G handset, is designed to be foolproof. First, the driver makes a videophone call to his or her company and breathes into the analyzer connected to their cell phone. The video image showing the driver blowing into the analyzer and data regarding the alcohol concentration on his or her breath are transmitted simultaneously to the company and are confirmed by computer there. The 270,000-Yen system includes 10 breath analyzers and software, while user companies also must cough up for the computer and cell phones.

DoCoMo started selling the system in late June; according to the carrier, inquiries have snowballed recently, with 15 companies already introducing the system and dozens more firms considering adopting it.

DoCoMo – Audio QR
While the technology is still in development (the DoCoMo R&D guy we spoke to wouldn’t say ‘when’ it’ll hit the street; someday soon, we gather from his manner), it is definitely the next step ahead in providing metadata with digital broadcasts. It’s just targeted at digital audio now, but WWJ thinks the exact same thing is under development for digiTV ‘casts as well. The possibilities are endless, and this is precisely the technology that ad agencies have been waiting for as mobile digital TV and radio use have slowly but steadily expanded.

Audio QR uses OFDM modulation technology in which the metadata is transmitted in parallel using two or more frequencies at the same time to suppress the influence of area noise and address the potential tone quality deterioration. DoCoMo also demonstrated the system in July at the Wireless Japan show, using an “hTc Z” Windows Mobile terminal; when a radio commercial voice came from a speaker in the booth, the metadata was received for a few seconds and a URL is displayed. DoCoMo says an audio QR advert can deliver about 100 text characters at about 1kbps in 1-2 seconds.