DoCoMo Mobile Credit: Everything You Know About 3G is Useless 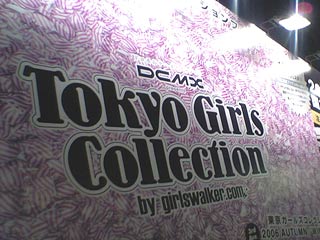 WWJ has spotted the first presence of NTT DoCoMo’s ‘DCMX’ mobile credit (card) service on the streets of Tokyo and, once again, the future has arrived. Lawrence Cosh-Ishii, WWJ’s director of digital media, en route to a central Tokyo video shoot a few days ago, spied the first street-level advert for retail goods payable via DCMX (image at right).

Predictably, the pitch came from Girl’s Walker, Xavel’s icon of community-centric, user-recommended mobile shopping, which earned the company Pharaonic riches long before dusty old ‘blogs’ were ever invented. Girl’s Walker is touting a special fall line of fashionable goods that can be paid for via “DoCoMo credit,” which takes the form of a real credit payment for adults, or the purchase cost is added to the monthly phone bill, for cash-flush, under-age teens. Note no reference to any sort of ‘card’ – the service is the phone, and credit ‘cards’ are oh-so-1970s.

DCMX is shaping up to be the main pillar in DoCoMo’s consumer financial services strategy that will lock in mobilers and secure massive revenues long after 3G – and the mere delivery of mobile digital content – has become a low-margin sideline that markets elsewhere still can’t comprehend. DCMX isn’t merely the the ‘Next Big Thing’ – it’s everything; and it’s going to make 3G itself redundant (WWJ subscribers log in for full viewpoint and details on the DCMX mobile credit service).

When KDDI announced flat-rate data on their new CDMA 1X 3G network back in the fall of 2003, the uppity competitor poked a gaping hole in DoCoMo’s carefully laid plans to amortize their massive W-CDMA 3G investments through many years of lucrative, per-packet billing revenues. DoCoMo President Tachikawa’s comment at the time of KDDI’s flat-rate launch was, “This will cause confusion in the market…”

According to DoCoMo’s long-term concept, the 3G plan had been based on adding new subscribers, and constantly getting all subscribers to use more packets by downloading ever-fatter 3G content such as audio, video, music and rich applications. Once the W-CDMA infrastructure and terminal development costs were paid for, Big D would roll into Profit City.

But flat rates ultimately limit the marginal revenue that a carrier can make from delivering mere bits. Once the introduction of flat-rate data by KDDI had forced all carriers in Japan to offer competing tariffs (causing, in contrast to Tachikawa’s prediction, very little confusion), DoCoMo strategists realised they needed a new plan.

That plan is as simple as it is revolutionary: remake the phone into a financial services terminal, replacing consumers’ wallets, physical cash and credit/debit cards with the phone as a networked virtual cash device. The carrier then needs merely to follow the classic credit-card business model and take a modest slice of every transaction.

The addition of Felica-technology IC chips onto DoCoMo handsets in 2004 established the first pillar in the carrier’s financial services strategy. Now, the phone can be used to store cash value and pay for physical goods with a simple swipe over a point-of-sale (POS) reader/writer; both KDDI and Vodafone have since joined the Felica bandwagon, wisely recognizing an unbeatable steamroller when they see it.

This past summer, DoCoMo announced the next pillar in the new, post-3G plan: the DCMX credit service.

Since, the IC chip on the phone is multi-function capable, and can uniquely and securely identify the handset, DoCoMo figured why not embed a Java application in the phone and allow the phone itself to be a credit card?

After all, that’s what a traditional credit card from the likes of Visa, Mastercard or JCB does: it uniquely identifies the customer and triggers a debit that is sent from the merchant’s POS machine to the card issuer’s network. All you need do is sign the little paper slip and – Presto! – you are free to walk out with your new Casio watch, the merchant gets paid (less a modest fee) and your monthly CC bill gets a little bigger.

Retail advertising we’ve been seeing around Tokyo this fall as well as on websites, touts, in Japanese, the new service as “DoCoMo’s Portable Credit” – the word ‘card’ isn’t used, confirming DoCoMo’s concept that not only are we in a post-3G era, but we’re now also in a post-credit card era.

And DoCoMo got past the potentially vexing Japanese legal requirement that, in order to issue real credit, you have to be licensed, through the simple expedient of buying part of a bank; the April 2005 tie-up with Sumitomo Mitsui Banking Corp and their Sumitomo Mitsui Card (SMC) division was worth approximately 98 bn yen.

DCMX is also available in a mini version. DCMX mini allows anyone who does not legally qualify for a real DCMX credit card (due to age, etc.) to make use of (sort-of) credit payment via their monthly DoCoMo bill (following the classic 2G i-mode model). In this case, total billing is limited to 10,000 yen per month. Kids as young as 12 can use it!

What the giant carrier has not made clear are the fees – and potential profits – involved.

For the full-credit DCMX service, does a merchant pay extra to SMC to also accept such payments? Does SMC charge a higher (or lower) per-transaction fee to the merchant?

For DCMX mini, how much does a merchant pay to DoCoMo to accept DCMX mini payments? What is the per-transaction fee?

Ironically, while the carrier stands to earn huge DCMX revenues, they may be setting themselves up for a loss with DCMX mini.

What happens when a phone bill doesn’t get paid? Who assumes the credit risk – the merchant or the carrier? Sure, a limit of 10,000 yen is small, but what if, say, 0.1 percent of DCMX mini users fail to pay after ringing up the full amount? If there are, eventually, 20 mn users, that’s still a sizeable loss. And if DoCoMo doesn’t accept the risk and guarantee that merchants will be paid, will we see a backlash against DCMX mini? At least with FeliCa cash payments, real cash is transferred to the merchant’s account in real time, eliminating any substantial (or non-payment) credit risk.

In the carrier’s March 2006 factbook [ PDF here ], there are additional hints at the non-traffic business plans to come. There is mention, for instance, of a tie-up with Rakutan, one of the Japanese Web’s oldest and most successful merchant, retail and auction sites. Can DoCoMo also become a sort of mobile e-Bay, taking a percentage of online auction and sales transactions just like DCMX allows them to take a percentage of financial transactions?

However the carrier resolves DCMX issues and evolves into new business lines, there is no doubt the future is here.

They may yet drop the ball entirely and mobile financial services may suffer from consumer as well as merchant backlash and widespread disdain. But Big D has a long memory, very deep pockets and at least one eye firmly fixed on users’ wallets – and the future.