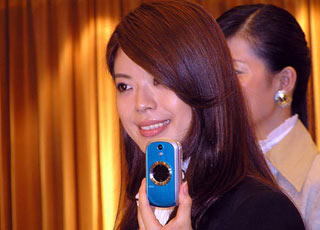 The accompanying new data offerings unveiled today include a scrolling news service (ala i-channel) and mobile video conferencing, the first such service from KDDI (which, until now, has philosophically posited that video conferencing was not suited for mobile), as well as several improved mobile music and digital TV offerings.

Perhaps the sexiest new data service unveiled today is “My Page” – a sort-of ‘My Space’ for mobile.

It will take us a few days to shift through all the material; nonetheless, one thing is clear. KDDI/au has come out with samurai sword waving in a bid to consolidate and lock in customers’ hearts, minds and wallets. This concentrated hardware-and-service assault – with products hitting the street from today through the fall – is just in time for Japan’s official launch of mobile number portability, set for 24 October. Note to DoCoMo and SoftBank: Be afraid.