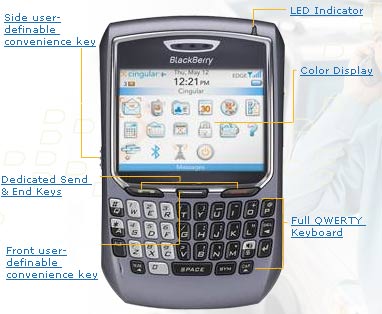 The pending Japan arrival of Research in Motion (RIM)’s hyperpopular BlackBerry email device, widely known as the ‘CrackBerry’ for its simple, efficient and addictive delivery of corporate email, will inject a new dimension into this country’s complex device and service matrix.

A wise move or a sign of desperation? These two viewpoints seem to characterize media, pundits’ and bloggers’ responses to last month’s announcement that DoCoMo would bring the BlackBerry email device into Japan, in partnership with RIM, based in Canada. Our own take on it was: Who Cares? WWJ was mindful that “virtually everyone in Japan’s workforce already has an always-on, fully connected email device right in their back pocket — in other words, a phone!”

Furthermore, before and since then, there has been more news, helping make it even more difficult to assess the BlackBerry’s prospects.

According to the pundits, NTT DoCoMo’s decision to import the BlackBerry is either (a) a master stroke aimed at securing the giant carrier’s corporate mobile offerings as 3G competition heats up in 2006/07, or (b) expensive folly that will see enterprise sales teams saddled with a clunky, ‘not-made-here’ device that competes poorly if at all against universal 3G phones that already receive push mail in real time, thank you very much (and some media reports have stated the first Japan BlackBerrys won’t even accept Japanese text input). The truth, however, is probably somewhere between these extremes, and so WWJ went straight to the source.

WWJ subscribers log in for full text of RIM interview.

Since May, we’ve known that Vodafone/SoftBank are aggressively planning the launch of Nokia E-Series (E60, E-61) devices this fall; just this month Willcom announced a new version of their super-sexy, extremely popular WZero-3 Windows Mobile PDA made by Sharp; and, just this week, DoCoMo themselves announced that the “hTc Z” Smartphone, equipped with the Microsoft Windows Mobile 5.0 Japanese-edition operating system, would hit the streets before August.

(WWJ will have video reports of both the E-Series devices and the HTC Smartphone next week. — Eds.)

And you just know that Son, IP Mobile and eAccess — the new 3G licensees — are hardly lazing about on their futons practicing ikebana. I’d be highly surprised if these three are not actively working on bringing cheap(er) Korean- and Chinese-made PDA devices into Japan for 2007.

Against this background of tough and growing competition, the specific details of the first BlackBerry model for Japan have been of intense interest. The most significant criticism leveled at the DoCoMo-RIM plan is that the initial device may only be a hastily adapted BlackBerry 8707 that can’t even accept Japanese text input (see comments here). It’s widely assumed (even by us) that this weakness would be a show-stopper.

But the reality is more complex and indeed there may be tech solutions already available for the Japanese input issue and, ultimately — and depending on DoCoMo’s overall strategy, the specific device capabilities may not matter that much.

To try and get an accurate take on the situation, WWJ conducted an email interview with RIM’s man in Tokyo: Nobuhisa Yoda, Senior Director, Japan Products, Research In Motion Japan Ltd., via RIM PR and we are delighted to present their responses below.

Once you’ve read the Q&A, read on below for our take on the implications of the company’s Japan plans.

Overall, not the best of responses to our series of questions, but far from the worst.

Japanese input. One key nugget in the Q&A above is the Japanese-input issue. RIM and DoCoMo are obviously aware of it and are considering options. Note that DoCoMo have already developed a Java-based Japanese-language module (Nanimail) that works with the BlackBerry, so this problem may simply go away. One WWJ reader wrote in recently to mention that he’s used the module in the UK and it works fine. But this remains a major issue to solve and if it isn’t by the launch time, I hope DoCoMo doesn’t hope to sell too many BlackBerrys.

i-mode access. Another key issue is battery life and i-mode support; RIM added that “DoCoMo and RIM haven’t released feature-specific information on the product such as battery life, i-mode support etc. but this information will be available at time of launch.” While it’s hard to imagine DoCoMo actively pushing any device that doesn’t offer i-mode (the only past nono-imode example that comes to mind was the M-1000), it could happen if the device is narrowly targeted at corporates, verticals (medical sales, photocopier maintenance) and non-consumers. Note the carrier has already had their 7-Series of ‘FOMA-lite’ phones available for some time as there clearly are some consumers who don’t want all the mobile Internet bells and whistles, but even these feature i-Channel push information. Presumably this extends to corporate users as well.

Device vs. server revenues. The quick fall of device prices at retail won’t affect the BlackBerry if it’s maintained as a corporate-only offering. It looks like DoCoMo will grab most of the device revenue for themselves, while leaving RIM to profit on sales of the BlackBerry server software and value-added features. Yet there’s no way RIM can do that, initially, until they’ve built up a corporate sales force and so, at least at first, I see DoCoMo even grabbing most of that revenue as well. The result is that even if RIM stays in Japan for the long-run, it will take a lot more human capital and country sales investment before profits could be significant.

Competition. Well, there’s lots of it. I’m not convinced that RIM have clearly conceived their strategy for dealing with Nokia, Vodafone/SoftBank, etc., but perhaps they are simply trusting to DoCoMo. That may not be a mistake; the carrier has recently enhanced their business sales efforts (and the online corporate sales portal), and if RIM merely plays the role of a tech vendor to DoCoMo, the partnership could still turn into a solid, if modest, money maker.

Conclusion. For WWJ, the jury is out. It’s still too soon to criticize or congratulate them, but we do applaud the effort to at least get started. In the meantime, Willcom’s selling WZero-3s, DoCoMo is selling HTCs, and Symbian just held their Symbian Summit 2006 event — all of which points to growing and significant competition. Final note to RIM & DoCoMo: hurry up!