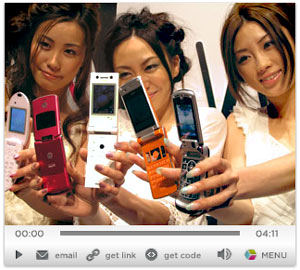 DoCoMo today announced six summer 3G handsets, including ’7-Series’ models from US maker Motorola, Sharp, NEC, Panasonic and Mitsubishi. The Japan-made models include three ‘designer’ phones, exhibiting ultracool shapes and colours conceived by noted Japanese design personalities, while Motorola joins the show with their M702iS and M702iG — the latter evidently based on the newest version of the widely popular ‘RAZR’ series, the Razr V3X.

The company unveiled the phones at a flashy press event held at the Harajuku Quest event space in central Tokyo. The three designer models, from Mitsubishi, Panasonic and NEC, offer a range of trendy colors including ‘lilac mirage’ and ’round coral’, and feature square, oval and bevel shapes based on the clam-shell form factor. DoCoMo’s choice of outside designers to create custom models is neither the first for the carrier nor for Japan and continues a popular (and lucrative) trend long developed by KDDI and Vodafone.

All phones unveiled today include, in varying mixes, the carrier’s stripped-down ’3G-lite’ voice and data services, including roaming, ‘Chaku-moji’ (which lets the caller enter a short message that will appear on the receiver’s phone as it rings), network phonebook backup, network lock-out of a lost phone, Deco-mail (HTML mail), i-Channel and music playback. But while the carrier presented the phones as the unified ’7-Series’, there are significant differences between the domestic and US models. The Motorolas fail to provide all of the signature lite FOMA services (lost phone lockout, PushTalk, removable memory) but they do roam, while the Japanese models don’t roam. (WWJ subscribers log in for more details and images.)

(Scroll to bottom for full images.)

The three designer models were conceived based on input from several much-talked-about Japanese designers, including Momoko Ikuta (Mitsubishi D702iF), Taku Satoh (P702iD) and Oki Sato (N702iS). The phones maintain the clam-shell form factor, but offer eye-catching colors, shapes and details and remind WWJ of several KDDI and Vodafone designer models from a couple seasons back. Never let it be said that DoCoMo fails to imitate the best of them!

Technically, the Japanese phones continue the stripped-down technology philosophy of earlier 7-Series models and don’t offer much that’s new other than design. Two of the three designer models include the interesting ‘Chaku moji’ feature based on the ring-back tone concept. The feature lets you enter a 10-character message prior to calling someone and have it appear on their screen when the phone rings. Notably, the third, the N702iS, appears practically devoid of technology, providing only i-Channel and i-mode mail (Deco-mail). It should prove popular with those who wish merely to make voice calls, though).

The most interesting phone unveiled today is, of course, the M702iG, or Razr V3X by any other name. The Razr-series is proving very popular outside Japan primarily due to its ultra-thin shape, the aluminum body and audio/video playback capabilities. In fact, DoCoMo have realized that it is one of the few overseas models that likely can compete with the very popular Japanese designer models that all three major carriers here have been creating every few quarters. Motorola also showed up with the M702iS, evidently based on an earlier V3.

None of today’s 7-Series final tech details were confirmed, but look for the M702iG to include a 2-megapixel outer camera, a microSD memory card, roaming capability with GSM/GPRS. It may (however unlikely) also provide HSDPA data speeds; Motorola have been working closely with Fujitsu and NEC to develop HSDPA models for DoCoMo according to some Japanese media reports, and the upgrade to the FOMA network should eventually provide about 3.6 Mbps download speeds (compared to FOMA’s nominal 384 Kbps). An HSDPA model looking a lot like today’s M702iG from Motorola was shown at DoCoMo’s stand at 3GSM in February 2006.

Overall, today’s new models are interesting if not ground breaking, and serve to highlight the continuing technical divide between foreign-made models and those from home — even when the carrier, the foreign maker and domestic makers are actively working together. Motorola clearly deemed it not worth their time to add several of the the signature FOMA services to their phones, and will have to rely, instead, on the phone’s matching the domestic makers’ ultracool sex appeal. 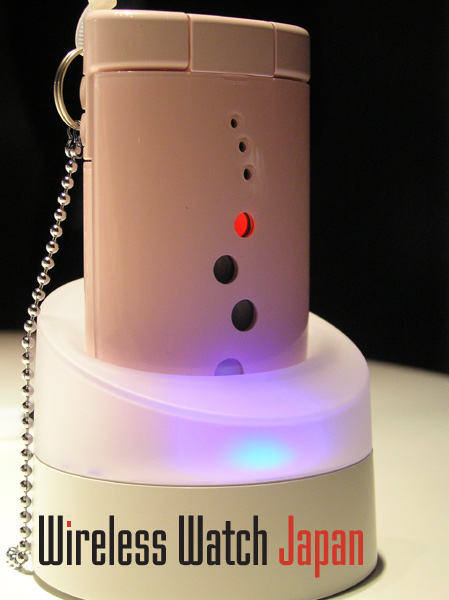 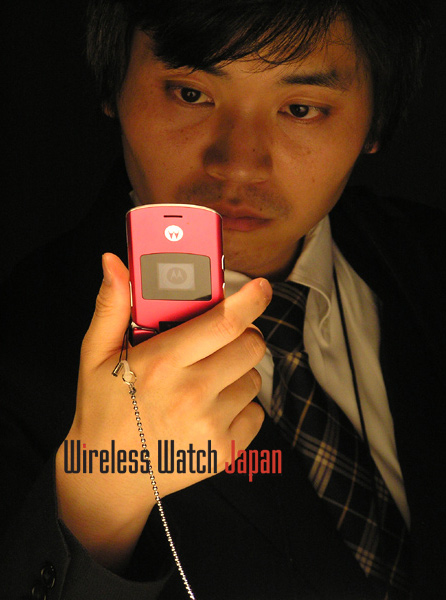