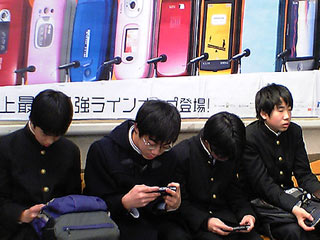 As mobile music settles into a steady mainstream growth cycle, with now-well-established hardware and content offerings, many industry watchers are looking towards the Next Big Thing. We think they need look no further than portable gaming, which is set to take mobile by storm. All the ingredients for mobile gaming success are in place: key platforms, faster 3G networks, affordable and flat-rate data, and a keen, heavy using youth demographic that continues to display a never-ending quest for hardware upgrades. Take a look around the streets of Tokyo, and the conclusion is unmissable: gaming for mobile devices is set for impressive growth in the next few years.

To date, the limiting factor has been the actual devices, as it was at one stage with music. The Nintendo DS and Sony PSP, much like Apple’s iPod, have proven to be early major hits as stand-alone units, having sufficient onboard CPU and memory capabilities to run some intensive games. In view of the success of porting the well-known ‘Walkman‘ onto mobile phones, can it be that long before we see the PSP label on a prototype cell phone from Sony Ericsson?

The photo tells it all. Taken recently by WWJ digital media director Lawrence Cosh-Ishii in suburban Tokyo, it shows a group of mid-teen boys waiting for a train at Shimo-Kitazawa station; all are playing with a PSP, blissfully ignorant of the huge poster for KDDI/au’s new music campaign. Note also that the recent BREW 2006 Conference issued a release with the news that Qualcomm and Microsoft will port MS ‘Live Anywhere’ for X-Box 360 gaming onto BREW-enabled mobile handsets. If you don’t think these tech giants have got it right, just watch what the kids are doing! (WWJ subscribers log in for full commentary.)

And it isn’t only Microsoft and Qualcomm that are jumping onboard. Several other media reports strongly support the trend, helping inform WWJ’s opinion that mobile gaming will be huge.

There have been several high-profile consolidations among game industry players, always a sign that those flush with cash are strengthening the ramparts for a pending assault. An outright merger or capital tie-up has been announced between Namco and Bandai, and Faith, Square Enix and Taito, respectively, with both deals appearing to support the conclusion that mobile gaming is a tough business to win. Other mobile game companies have told WWJ that, despite growing usage and better devices, falling margins and a fickle user base are making it tougher to score a hit with any new, expensive-to-develop, game.

Overall, the industry is clearly headed for a major growth phase, similar to the one seen after DoCoMo introduced Java in 2001, but this time powered by devices, software and networks that are hugely more capable than those of five years ago.

We also note that a recent Info-Plant survey on “Desirable Mobile Services” found that current, actual usage of games (of all genres) on mobile is already higher than music!

Since the power to push this evolution, in Japan at least, lies with the operators, the actual timeline for rolling out a true, next-gen game platform remains to be defined. As with the lag illustrated by DoCoMo only announcing a music strategy this year (following Vodafone’s V-Live BB model, based on a PC download and memory-card transfer), years after KDDI and Vodafone had services up and running, it seems likely that the real mobile gaming push may come first from one of the new, livelier carrier kids on the block.

Already in the 2G and early 3G era, the mobile phone’s ‘game outside’ twist has allowed for some innovative offerings, such as games based on GPS and embedded motion sensors. Further, and for some time already, a significant base of handsets in use in Japan have pre installed Flash-lite capability, which could also enable some interesting, unique-to-mobile games. We’re also seeing increasing interest in mobile gaming at the annual Tokyo Game Show, whose site reports that the percentage of exhibitors from PC and mobile phones “is increasing year to year.”

A skeptic would make the obvious music-to-mobile comparison on the point of potential sales volume: while most users will likely pay to download dozens of music tracks at least, how many game titles can an average casual user be expected to buy? Indeed, the challenge for the content providers is having an attractive offering and bundling other content/services that places their product in top position; this will help gain critical mass.

Also, providers large and small must think cross-promotion, possibly enabling their established console/PC titles with mobile-enabled community chat functions (like Habbo Hotel for example); a ‘series’ strategy (already hugely successful with PC platform games) will help establish a predictable upgrade cycle and keep players (thumbers?) happy (and buying). As mentioned earlier, the real power, and the potential benefit in comparison to music, will go to the operators that generate subscription revenue, follow-on sales, and sales of related content and services.

So, who, really, will blaze the mobile gaming trail?

We note a somewhat obscure report, dated November 2005 via the Financial Times, stating that Vodafone K.K. (now SoftBank Mobile) was actively seeking potential MVNO partners to resell, under their own brand, excess 3G network capacity. With only just over 3 mn customers on their network, compared to about seven times more on networks run by competitors DoCoMo and KDDI, it was an obvious opportunity to generate additional revenue.

No doubt, the ongoing sale of Vodafone K.K. to SoftBank has likely put this and other new partnerships on hold, but once Son-san has taken full control and the network has been rebranded, the underlying MVNO possibility is still in place. SoftBank Mobile still has both the opportunity (and challenge) to sell what is in effect dark fiber to, say, a Disney or a Jupiter — and such a deal still makes perfect sense.

Softbank have also been talking with HTC, a Taiwanese device maker, and may well offer a new Microsoft mobile OS-based smartphone [.jpg], which would give the carrier a credible hand-held player platform capable of playing some great Flash games as well. Couldn’t such a device be branded under any logo and resold through a game partner like Disney or any other publisher? We think so.

The mobile music machine will continue to grab headlines for the foreseeable future, but without a doubt mobile gaming appears set to become the next mobile content darling.