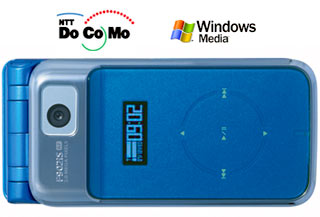 The carrier said that the series includes Japan’s first HSDPA-compatible handset, the N902iX HIGH-SPEED. HSDPA is a new high-speed packet-transmission technology for downlinks at up to 3.6Mbps, or 10 times faster than current FOMA handsets. All models in the 9-Series have music players; some are also compatible with DoCoMo’s Chaku-Uta Full service for downloading full music tracks via i-mode, as well as ‘Music Channel’ for programmed, automatic downloading of music from i-mode sites during the night, and Windows Media Audio files (F902iS).

Other features common to many of the new 9 Series handsets include:

Many of the new handsets are also compatible with existing 902i features, such as PushTalk, Osaifu-Keitai e-wallet services, ToruCa (for mobile access to information about stores, products, etc. by simply waving the phone in front of a reader/writer at a merchant or other location) and i-channel for news, weather, sports scores, horoscopes, etc., delivered automatically to the phone’s standby screen as telop text (full 9-Series PR here: http://www.nttdocomo.com/pr/2006/001266.html).

In a separate announcement, the company said that, with support on hundreds of devices and services, Windows Media Audio and Windows Media DRM are the most widely deployed technologies in the world for the delivery of digital music.

Windows Media DRM supports a wide range of business models that include download and play, subscription and video on demand, and enables mobile operators with the choice to directly acquire licenses on their handsets and/or load content from PCs through USB cable. Microsoft recently announced it will make significant investments in its DRM technologies, specifically to enable a new offering and drive scenarios that support the wireless industry.

The deployment would be the first such development involving Microsoft on a mobile phone in Japan. DoCoMo has long refused to adopt Microsoft Windows technology as the operating system or browser for its mobile phones in Japan, so the move appears to signal a new willingness to deal with the US software giant. Microsoft mobile operating system software has appeared in Japan on PDAs, notably the Sharp W-ZERO3 offered by PHS carrier Willcom.

In another release, NTT DoCoMo, Inc. announced today the development of the FOMA M2501 HIGH-SPEED PCMCIA Type II data card for speedy mobile packet transmissions with PCs. Downlink speeds of up to 3.6Mbps are available in new HSDPA service areas (“FOMA HIGH-SPEED Areas”) in Japan. The card works on W-CDMA, GSM and GPRS networks. Packet communications roaming is possible in 69 countries/regions and voice roaming in 132 countries/regions (end April 2006). Voice and videophone calls can be made with a PC (requires installing dedicated software, optional earphone/microphone, and web camera).

In today’s final news, NTT DoCoMo announced the newly developed 3G FOMA SA702i and SO702i handsets, which are the latest additions to the FOMA 702i-series, marketed since February.

Like other 702i handsets, the two models offer regular FOMA features such as videophone and Deco-mail, and also i-channel, which automatically delivers news, weather, entertainment, sports and horoscopes via teletype to the standby screen. The phones also offer a designer look and feel.

According to the company, the SA702i’s urbane design is accentuated with sophisticated two-tone coloring. The lower half of the handset is tapered toward the end, making it especially easy to grasp. A global positioning system enables the handset to be used for navigation, assisted by voice guidance and an electronic compass, which indicates the direction the handset is pointing. The destination is set by simply entering an address, train station name or other keyword. The model is also equipped with an FM radio tuner with automatic station search, enabling users to listen to FM broadcasts while browsing i-mode or emailing.

The other model, the SO702i, boasts the most compact body (about 75cc) in the FOMA 7-Series. This is DoCoMo’s first phone to accept front and back jackets, to create an extra-personalized look. Nine jackets created by designers in Sweden, the United Kingdom and Japan are available. An extra-bright (approx. 400-candela) screen makes outdoor viewing easy.