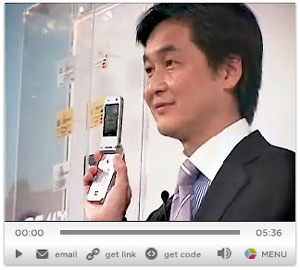 DCMX: Is it a phone that can buy stuff or a credit card that can make calls? NTT DoCoMo is hoping that millions of spend-free consumers won’t know or care about the distinction and will simply use the new ‘DCMX’ credit-card phone for, well, pretty much everything. For small, daily purchases — like a six-pack and a take-out bento lunch — use the phone’s e-money FeliCa chip with no authentication required; for larger buys (a cool Louis Vuitton bag from the Omotesando boutique), use the DCMX credit-card function with a swipe and a PIN code; later, the phone will eyeball you for biometric authorization. “We wish to combine telecoms with financial services,” says DoCoMo’s Mr i-mode, Takeshi Natsuno, in today’s video program — and if there’s a cellco anywhere in the world that can afford the value-chain coordination costs to deploy a workable phone/credit card combo, it has to be NTT DoCoMo.DCMX is a logical progression from the carrier’s popular ‘o-saifu keitai’ IC-chip handsets that can store value onboard for small, daily purchases, and the launch announcement confirms DoCoMo’s strategic course aiming squarely at making the network-connected phone the payment method of choice for millions of Japanese. Maybe one day something this useful will be offered by carriers elsewhere? Subscribers log in for full video (including hands-on test-drive), plus Q&A session .mp3 and our additional comments. Free video program run time: 5:36

The carrier hopes mobilers will continue to use the phone’s FeliCa IC chip, which is limited in how much value it can store (about 50,000 yen), for small daily purchases and for transportation and commuting — maybe picking up some groceries on the way home or paying for a day at the ‘hair & make’ salon.FeliCa has become popular and widespread, with consumers using both the phone and IC card versions (retailed under the ‘Edy’ name) of the FeliCa technology for a growing range of purchases at a growing range of shops.Â

Earlier this week, Shigeyuki Kawai, president and CEO of Bitwallet KK (the joint venture set up by DoCoMo, Sony and a slew of others to operate and settle FeliCa-based e-money transactions) said that business development with regard to FeliCa-based e-money is on track.

He was quoted in the Nikkei as saying: “The number of payments made by Edy reached 110 million in 2005; as of April 2006, the numbers of total issuances including cards and mobile phone handsets with Edy functions, and affiliated stores have reached about 17 million and 31,000, respectively; and the number of mobile phone handsets equipped with Edy function has exceeded 3 million units.”

The Bitwallet CEO was speaking at an event marking an investment by Intel Capital into Bitwallet, the first such vote of confidence in Japan’s e-money system by an overseas player.

The only FeliCa slippage to date appears to be the combination of mobile FeliCa with Japan Rail train passes, a new service launched by DoCoMo and JR East in January 2006. It allows the phone to serve as a train pass, but JR inexplicable opened the new ‘Mobile Suica’ service only to those who have (or agree to sign up for) JR’s own-branded ‘Suica’ credit card, automatically limiting the wide consumer/commuter adoption that DoCoMo was undoubtedly hoping for.

To make a credit card purchase with your DCMX phone, you need only swipe the phone in front of a reader/writer. If the value is over 10,000 yen and you choose credit card, you’ll also have to enter a PIN code. It’s all done on the handset and it takes all of 20 seconds to complete.

Natsuno-san said DoCoMo aims to deploy more than 320,000 reader/writers — 100,000 by end of the year and 150,000 by March 2007. He also stressed current and future security measures. Now, access to the phone’s financial features is controlled by a PIN code and, on some models, by a fingerprint reader. In the future, you’ll use the phone to take a picture of your face to gain access and later the camera will scan biometric data — perhaps all you’ll have to do is squint at the phone with an eyeball or two.

Perhaps most important and largely under-reported feature of the DCMX system is that not only is DoCoMo launching their own mobile credit-card brand and service, but they are also opening up the phone’s FeliCa-based credit-card payment functionality to other credit card issuers, so that ‘financial services’ becomes a platform for third-parties in the same sense that i-mode became a platform for the provision of third-party digital content.Â

The lesson of 3G seems to be that flat-rate data ultimately limits any carrier’s potential revenues based on the provision of data and content alone. Thus DoCoMo’s massive investments in mobile financial services (FeliCa technology, merchant reader/writer subsidies, Bitwallet JV, the tie-ups with banks and credit card companies, etc.) seems to be their chosen path for securing revenue growth in the future.

The lesson of 3G seems to be that flat-rate data ultimately limits any carrier’s potential revenues based on the provision of data and content alone. Thus DoCoMo’s massive investments in mobile financial services (FeliCa technology, merchant reader/writer subsidies, Bitwallet JV, the tie-ups with banks and credit card companies, etc.) seems to be their chosen path for securing revenue growth in the future.