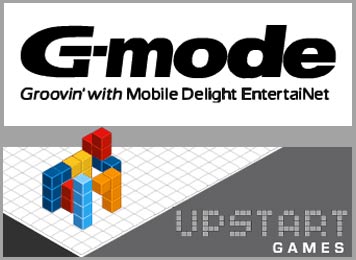 Despite all the effort WWJ has put into finding and covering software developers that have successfully transitioned out of Japan’s navel-gazing mobile market to markets elsewhere, I must admit we haven’t found thousands. Or even dozens. But one of them is Shinjuku, Tokyo-based G-mode, and this week the Japanese mobile game maker and its Dublin, Ireland-based partner Upstart Games said four IQ-enhancing games, already popular in Japan, would be distributed in the US and Europe via Upstart. The news underscores the profits to be found when forward-thinking mobile players work hard to bridge the wireless culture divide.

Upstart’s CEO Barry O’Neil told WWJ that the company has been planning to launch a brain training game for mobile since the runaway success of the genre in Japan late last year. Ironically, the Irish side was initially skeptical that such a narrow niche could win operator interest in Europe or the US. “We’ve a relationship with G-mode dating back to last year, and their Right Brain Paradise was something we’d looked at in the past, but felt gaining operator support could be difficult. Now that the genre is becoming more widely known we felt the time was right to introduce this mobile series,” he wrote in an email yesterday.

The three-game series, dubbed, “I.Q. Academy” is intended to help get players’ brains in shape by offering games designed to exercise the brain’s right side and improve spatial, visual and cognitive skills in the player. I.Q. Academy is based on G-mode’s hyperpopular ‘Right Brain Paradise’ series, which, according to the company, has sold almost two million downloads. The series is expected to launch in Europe and the US in the coming months (WWJ subscribers log in for full article).

G-mode’s Right Brain Paradise-series first launched in Japan in March 2003, with new releases having being made to the series since then. The games include specially designed puzzles to gauge a player’s responsiveness and accuracy in performing tasks such as recognizing shapes and patterns, predicting a series of actions and other tasks aimed at improving spatial resolution.

The two game makers cite as evidence that mobile game thumbing is good for the brain research findings from The Games for Health Project (http://www.gamesforhealth.org) which indicate that “game playing can have a positive effect on maintaining mental acuity and fight senile dementia.”

Whether that’s true or not, it certainly has a positive effect on game software developers’ bottom lines. G-mode has evolved since foundation in 2001 (just before NTT DoCoMo launched Java services on i-mode) from a small start-up focusing initially on the Japan market to become a growing force in mobile gaming, with business partnerships and capital tie-ups involving a range of Europe- and US-based carriers, application developers and game publishers. Upstart Games has similarly seen solid growth since foundation in 2002, and now works with carriers in the US and Europe as well as with major Japanese game publishers including Konami and Sony Computer Entertainment.

Upstart’s CEO Barry O’Neil told WWJ that the company has been planning to launch a brain training game for mobile since the runaway success of the genre in Japan late last year. Ironically, the Irish side was initially skeptical that such a narrow niche could win operator interest in Europe or the US. “We’ve a relationship with G-mode dating back to last year, and their Right Brain Paradise was something we’d looked at in the past, but felt gaining operator support could be difficult. Now that the genre is becoming more widely known we felt the time was right to introduce this mobile series,” he wrote in an email yesterday.

The release of the four games in a series may be one of the first examples of a publisher outside Japan providing a package of thematically similar games, a practice long since proven in Japan. This has allowed Japanese publishers — particularly mobile publishers like G-mode — to define and segment audiences, with good results on the profit end. “G-mode has been releasing many casual puzzle games, which allowed G-mode to target the female and older audiences. By gender, half of G-mode customers are female, and by age, half are over 30 years old. I certainly hope that western operators will stop ‘cherry picking’ the contents,” says Hiro Higashiyama, business development manager for G-mode. (Disclosure: WWJ readers who also attend Mobile Monday in Tokyo will recall G-mode’s Higashiyama presented its products and services at Mobile Monday last October; both MoMo and WWJ are operated by Mobikyo KK.)

Upstart’s O’Neil says that Japan gaming trends (as well as mobile devices) are one to two years ahead of the West. “Casual and ‘one-button’ games have been big sellers in Japan for the last couple of years, but it has only been in the last six months that we’ve seen active interest in these titles for western distribution. Some titles that have done well for us in the past have been ‘classic’ titles — these were actually well out of date in the Japanese market by the time they were peaking in the west.”

The wireless tech advances in Japan render at least some popular titles undeliverable in the US and Europe. Game publishers outside Japan could well partner with a Japanese developer having a library of high-quality 3D titles, for example, but these games aren’t easily localized to run on networks and devices elsewhere. “Device support issues in the West are an issue. The technical challenges of porting these to the magic 80 percent of a western carrier’s device list makes it commercially unfeasible, if not technically impossible,” says O’Neil.

Of course, there is scope for limited releases on high-end UMTS/3G and other devices, but such limited distribution can make tuning a profit a real challenge.

Finally, there are culture issues. O’Neil thinks only about 10 percent of all Japan-originated titles will have any chance of success outside of i-mode’s birthplace. The trick for Upstart, G-mode and other publishers is to identify the right 10 percent.

G-mode’s Higashiyama says, “Japanese games in the west — retro classics did well in the west on mobile phones, but I feel that this phase is coming to an end. The latest 3D games from console titles may do well, as many western operators are demanding these, but I feel that the users are not. Like in the Japanese market, I think content providers should be given a site, where they can release their contents as they wish, and let the users choose what they want to play — not with the western operators force feeding the users.”

The full press release is here.