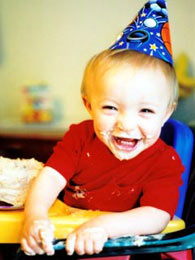 This week marked a major milestone for WWJ! In one form or another, I’ve been writing this email newsletter for five years — and what a five year term it’s been!Â

I spent a couple hours last night looking over past WWJ newsletters, and was struck by how much Japan’s mobile scene has changed. In 2001, when I started writing a weekly mobile-focused newsletter for J@pan Inc, i-mode had just celebrated its second birthday, KDDI had yet to roll out CDMA 1X services and the No. 3 competitor in the market was known as “J-Phone.”

Today, DoCoMo is far in the lead with their 3G FOMA service and music and TV are the new hot trends; i-mode itself has become almost dasai (uncool). KDDI have created one of the mightiest and most unified mobile platforms on Earth, with GPS-based blogging, shopping and PC Internet integration drawing huge usage. The company formerly known as J-Phone is about to become the company formerly known as Vodafone as Masayoshi Son attacks 3G mobile with the same successful discount focus with which he attacked NTT and home broadband.

In March 2001, 2G i-mode still offered 9.6 kbps data (the upgrade to 28.8 kbps came in spring 2002). They had just launched i-Appli Java content services providing a maximum 10 KB (later, 30 KB) application download — and some developers weren’t happy about the way the boys at Sanno Park channeled the necessary development specifications to favoured content partners first. Now, on 3G FOMA, Java apps are 100 KB, Flash downloads are set, I seem to recall, at about 100 KB and the network routinely provides pretty close to the advertised 384 kbps downloads.

On 5 March 2001, DoCoMo said there were about 1,480 official i-mode sites including 59 i-appli-compatible sites along with another 40,053 independent sites; Today, there are 5,937 official sites serving FOMA users and 5,020 serving 2G (“Mova”) users. There are tens of thousands of unofficial sites serving both.

J-Phone and KDDI also launched Java services in mid-2001, both set at 30 KB downloads to compete with DoCoMo’s paltry 10 KB.

In May 2001, KDDI announced the first Bluetooth handset in Japan, Casio’s C413S. Bluetooth has never really caught on in Japan — for mobile or any other usage.

In October, DoCoMo opened their FOMA 3G service; the handsets were awful.

Finally, the other players — Tu-Ka (2G PDC), DDI Pocket (PHS) and a couple other minor PHS operators — mucked about on the fringes, offering super-cheap monochrome handsets and copy-cat data services. Today, most of these brands are gone. Willcom (a JV between Kyocera and a US equity firm) has taken over the PHS system and is doing rather well, while Tu-Ka has been absorbed into KDDI who is actively converting the user base to CDMA. DoCoMo also runs a PHS system, but has stopped accepting new subscribers.

Where will WWJ go in 2006?
Well, basically, we’ll cover wherever the market goes, and that includes some incredible transformations about to or already taking place.

As we enter our sixth year, look for:

It’s been a helluva ride since March 2001 and, if anything, the future is shaping up for five more years of mobile mayhem in Japan. Please accept our sincere thanks for your passionate and thoughtful patronage over the years of the WWJ site, the WWJ newsletter and — more recently — the Mobile Monday networking community.