Sanyo and Nokia to JV for U.S.

Sanyo Electric Co. has reached a basic agreement with Finland’s Nokia Corp. to set up a 50-50 joint venture in the US as early as next autumn to make 3G mobile phones, the Nihon Keizai Shimbun reported without citing sources. The new joint venture, which will likely be located in San Diego will produce CDMA2000 3G cell phones, the business daily said. For Nokia, the joint venture will likely help it absorb Sanyo’s know-how, particularly in the development of thin handsets, according to the report.Â

In Japan, KDDI Corp’s ‘au’ cell phone service is based on the CDMA 2000 standard, but NTT DoCoMo’s ‘FOMA’ and Vodafone KK’s 3G services use the W-CDMA standard. The newspaper said Sanyo, currently undergoing a business rehabilitation program, will independently continue operations for 3G handsets for the W-CDMA standard, thereby concentrating its resources on the W-CDMA handsets to better manage its tight financial situation. 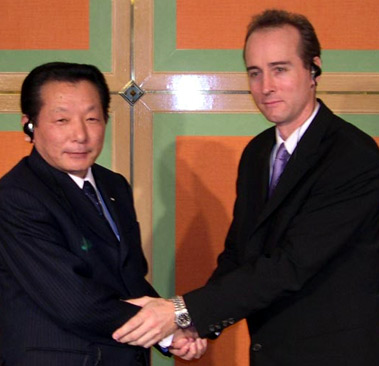