Last week was a rare clean sweep in Japan’s tooth-and-nail handset race as each of the Big Three carriers in turn announced multiple new 3G models at splashy press events. Across the field, we saw an onboard 4-GB hard drive and a digiTV phone from KDDI, the 702i ‘designer’ models from DoCoMo and Japan’s first Samsung phone and new 3G data services from Vodafone. 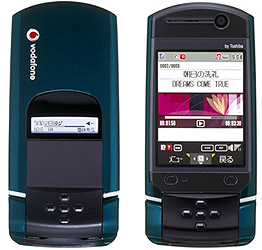 It’s no simple coincidence that this week the carriers are announcing their third-quarter financial results: it’s super vital to have a flashy new set of handsets to point to when presenting your report card to the analysts in Tokyo and London. Also, spring is the premiere mobile sales season in Japan and the models announced last week should hit the streets around cheery blossom time.

If Vodafone Japan’s market troubles in the past couple of years can be blamed on handset mix, then the new phones may go a long way to to fixing Big Red’s market position. Today’s WWJ Portable Reportable MP3 audio report features an interview with Vodafone Japan from last week’s press event with in-depth details on their new 3G models, which include phones from Samsung, Toshiba, Sharp and NEC, and comments on competitive positioning in the market.

Further, in today’s financial results from Vodafone, the company specifically said that “Non-voice revenues [were] broadly stable. The improvement versus the previous quarter can be attributed to an improved ability to retain customers, resulting from a better handset line-up and service offering.”

Clearly, better handsets are a vital element in any improvement to the company’s fortunes.