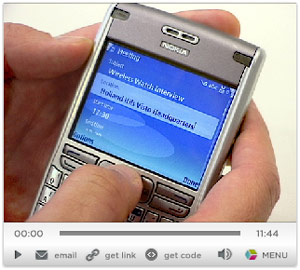 Yesterday, Vodafone Japan announced ‘Office Mail’ a new, secure push-mail corporate solution for 3G powered by Visto. Japan’s DoCoMo, KDDI and Vodafone have never had a lot of success in selling mobile applications to the corporate market due to the carriers’ overwhelming focus on the highly profitable consumer market. Perhaps Vodafone’s selection of a cool Nokia Symbian phone and the promise of more Nokia devices having a buttoned-down, made-overseas, cool business image will get corporate users bugging their IT managers to call Big Red and sign up for Office Mail.

Vodafone’s Office Mail is powered by the Visto Mobile Solution platform, and Vodafone K.K. says it will be able to offer subscribers secure, real-time, two-way delivery of email, contacts and calendars to select phones, starting with the new 702NK II, also known as the Nokia 6680 Smartphone. Office Mail is targeted at business professionals at large and small companies and SOHOs as well as at consumers.