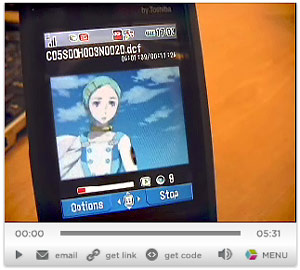 It’s rare for WWJ editors, a jaded bunch, to get too excited about new service announcements, but on 6 December, we jumped on this fresh Vodafone press release that seemed to herald the emergence of the rather cool, made-in-Japan ‘Vodafone Live! BB’ (BB= broadband) music- and video-download service into the Group’s European markets. Vodafone live! BB uses the ‘i-Pod model’ to get large media files onto mobile phones, avoiding network traffic fees and should be, we have always thought, a no-brainer for export to Vodafone Opcos outside Japan. Don’t mobilers everywhere want to save on packet/data fees and get audio and DVD-quality video onto their handsets Original Vodafone live! BB TV commercial [ Win. Media 300KB ]

Sadly, we confirmed that the news was really just an expansion of the Group’s existing ‘Mobile TV’ service, which uses the 3G/UMTS network to deliver programs as streaming data. Granted, most European Vodafone customers can stream all they want on flat-rate tariffs, but why not provide both services to customers everywhere? The answer, we think, hinges on a little-covered, open secret about 3G in Japan.

First, it’s worth taking a look at ‘Vodafone live! BB’ in Japan (and not available elsewhere) and comparing it to Vodafone ‘Mobile TV’ (available in a growing number of European markets and not available in Japan) — both deliver multimedia content to 3G handsets, but they operate in fundamentally different ways.

With the service, Vodafone Japan customers with the newest 3G handsets access the BB entertainment portal via home PC to browse and freely download as many media files as they like. Files are not limited in size, but typically weigh in at a few up to a few tens of megabytes; they can even run up to to 30 MB (or 50MB for a 20-minute soap opera). Then, the download content files can be transferred to the phone using the phone’s memory card.

When you try to access the file using the phone’s onboard media player, you’ll be prompted to obtain a digital key (via the mobile network); once the key has been downloaded, the file is unlocked and can be then be fully accessed. Since the (large) file arrived on the phone via memory card, there are no traffic fees, a major issue in Japan — even with the advent of flat-rate data for some customers — and, presumably, a major draw for customers to use the service.

BB content providers can set the price and DRM policy for their content; fees typically run around JPY200 per song with unlimited playback, and can range from JPY150 for a two-week access period up to unlimited access Madonna’s latest music video for JPY420. Providers can limit their files to allow playback a certain number of times or for a certain period.

Vodafone does not release specific metrics on number of users, number of downloads, etc. Nicholson says, however, the service has been well-received, and that since launch, additional music and video providers have joined the portal, including Warner Music and Avex, two of Japan’s biggest labels. “Music videos are one of the top categories, and while Vodafone live! BB usage isn’t as big as downloading Chaku Uta via the wireless network, people who use it also tend to be strong PC users,” says Nicholson.

Vodafone Mobile TV
Vodafone ‘Mobile TV’ has been offered in European markets since November 2004. The service operates as streaming video delivered over the air to Vodafone UMTS (3G) handsets. Content pricing varies according to market, but in the UK, for example, after an initial free period that ends in January 2006, channel packs will cost 3.00 or 5.00 GBP per month.

This is the news that we had hoped indicated the expansion of V-LIVE BB outside Japan.

Mobile TV Expanded
On 6 December, Vodafone Group announced a major expansion billed as “Global Mobile TV” with the addition of programming including “Sex and the City” and “Six Feet Under” (from HBO), Eurosport, MTV and the Discovery Channel, among others, to be made widely available across Vodafone markets, including Germany, Greece, Italy, Netherlands, New Zealand, Portugal, Spain, the UK, Belgium, France, Switzerland, and Austria.

Programs are packaged so as to be easily accessible via mobile; some programs run in 90-minute loops, while others are edited to show just certain highlights, i.e., sports and news, similar to news clips shown on airplanes just before the movie starts. Vodafone’s earlier press releases talk about HBO programming which will be adapted for various Vodafone markets and scheduled in 90 minute loops, 24 hours a day, points out Dror Gill, CEO of Gamdala, a mobile media research company in Israel that has recently completed a mobile TV study. “This means that users will view these loops as streaming video using their 3G handsets, and not download the content to their phones from a PC. Mobile TV services using streaming over 3G networks have been launched by many operators around the world, and the message Vodafone is bringing with its new service is ‘global content that is available to its users globally’,” says Gill.

But is it Flat-rate?
The key point to note is that in Europe, Vodafone UMTS customers generally do not pay extra traffic fees for browsing (or streaming from) the Vodafone portal. “There are no additional charges for data with regard to our TV proposition. When using and buying services in Vodafone live! the traffic charges are always included,” says Anders Jensen, director for marketing at Vodafone Sweden.

In Japan, however, 3G customers are faced with “Dual-Packet” flat-rate, and must pay for packets in addition to voice calls. The dual levels run at 1,050 yen and 4,095 yen; the lower fee is for the first 20,000 packets, then up to 78,000 packets are billed at .05 yen per packet, then all packets beyond 78,000 will cost 4,095 yen. While this upper fee may appear modest, it’s more than many casual users spend, thus getting multimedia content via (free) PC download via BB is compelling.

Given the level of success enjoyed by Apple and their iPod and the proven ability of an average customer in and outside Japan to browse a PC portal via broadband, download a large media file and transfer it to a phone or other portable device, why not export the BB service outside Japan?

“Each market is different,” says Nicholson. “BB was custom-designed for Japan; mobile TV was also made easy to use for European markets. Each offers attractive contents, but differently.”

The other obvious point is also that there’s no need for a BB-style service outside Japan because streaming content is free of traffic charges.

Another way to question the Vodafone strategy is to ask, Why do 3G customers in Europe get flat-rate data streaming while the same customer category in Japan — with exactly the same handset — has to go through the at least somewhat clunky process of downloading the media file via home PC, or pay per-packet download fees or an (expensive) flat-rate ‘floor’ at 4,05 yen? Why can’t Japanese mobilers received free digital streaming like their counterparts in London and Stockholm?

Widely Known 3G Secrets
The answer lies in one of the most widely known secrets of 3G in Japan: no 3G carrier has yet entirely opened their network to cheap, all-you-can-eat, streaming downloads due to real and unavoidable network capacity issues.

This fact has been confirmed on several occasions by well-placed industry insiders (none of whom have ever allowed themselves to be directly quoted). Does this issue affect the other two carriers as well?

Fact: When KDDI launched their ‘EZ Channel’ TV clip download service in 2003, it was carefully constructed so as to push the files to subscribed handsets overnight when network usage is, presumably, at the lowest. Customers could only register for up to 3 MB’s of programs and the number of content providers was initially limited (several more were allowed to join earlier this year). Even with the extra bandwidth on the 1X EV-DO CDMA network, WWJ strongly suspects that capacity remains a real issue.

Fact: When DoCoMo, with their W-CDMA network, was forced to provide flat-rate data in response to KDDI’s unilateral move in June 2004, the pricing was set (like Vodafone’s) in a two-tiered structure with the top level being 3,900 yen — but only for subscribers who opted for the FOMA Plan 67, FOMA Plan 100 and FOMA Plan 150 voice plans. This meant that flat-rate data really cost over 10,000 yen per month, thus automatically limiting the number of all-you-can-eat users to just a small fraction of all 3G users.

I also recall that WWJ has ex-DoCoMo President Tachikawa on video during a presser some 15 months back admitting, while discussing the entry of new 3G licensees into the market, that DoCoMo barely had sufficient bandwidth for their own purposes and was not in a position to re-sell capacity to an MVNO or other 3rd party.

And, finally, note that Vodafone’s Japan dual-flat tariff is only available to 3G customers, who can use a range of options for voice calling between 3,900 and 20,000 yen per month, but would at least have to select the 9,800 yen per month plan to get approximately 10 minutes per day of calling, according to the 2005 (Vol. 3) price catalog. This, too, would limit all-you-can-eat usage to a relatively small portion of the market.

Vodafone’s European Mobile TV service also raises questions of exclusivity. The traffic-fee-free streaming content is only available for files grabbed off of the Vodafone portal. My guess is that the providers will receive far less than the 80-90 percent cut of content fees, once they kick in in February 2006, than is customary in Japan. So if you wish to make your content available for free, off portal, don’t call Vodafone. And this affects major content owners, like the BBC and other public broadcasters, which are prohibited from billing for content. How do they compete with official Vodafone Mobile TV providers who can deliver their content free of traffic charges?

Snapshot in Time
This story is, ultimately, a “snapshot in time” of 3G networks in Japan and Europe.

After more than three years of operation in Japan (soon to be five for DoCoMo’s FOMA), 3G suffers from capacity issues that seem to have been there from the very start.

We can speculate that network usage patterns, the prevalence of data-hungry mobile applications and content (Chaku Uta Full, Java, Flash, etc.), population density (just try walking through Hachiko square in Shibuya on a Saturday afternoon without bumping into anyone else), the capital cost of building out 3G coverage and coverage density, and the relative newness of the 3G networks all play roles in setting real and unavoidable capacity limits in Japan.

Conversely, in Europe, where UMTS is less than two years old (depending on country), Vodafone is more or less giving away bandwidth and streaming content (by not charging extra) in an attempt to, one may suppose, seed the market and boost usage among the still nascent (but growing) 3G user base. Based on the Japan experience, 3G carriers in Europe should watch out what they wish for.