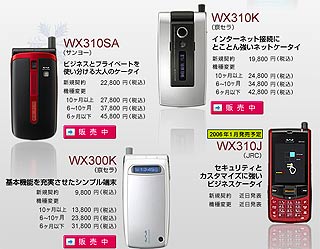 “Despite the high prices, there were huge line-ups waiting to buy the new Willcom PHSes,” said my Kiwi pal in an email last night. It looks like some of Willcom’s PHS phones appear to be selling well on the strength of flat-rate voice and data and handsets that are at least comparable to the high-end 3G cellular models from the Big Three carriers. Is this a hint of price destruction to come when the new licensees jump into the market in 2006?

“It normally takes about 20 minutes to get a new phone, but the wait for the new Willcom models on the first day of sales was over an hour and a half. A day or two later and the long lines have vanished,” added Keith Wilkinson, a long-time Japan hand and a keen watcher of all things electronic.

He was referring to the WX300K, WX310K and WX310SA, from Kyocera and Sanyo, as initially reported by WWJ in October, the first in a new series of PHS models. PHS is the shorter-range, non-cellular standard that has enjoyed a resurgence in popularity due to lower costs of usage and flat-rate pricing. According to Willcom, phones could be reserved starting on 11 November, and became or will become available in shops on the 18th (WX300K, silver and ochre), the 25th (WX310K, silver & pink; WX310SA, silver & red) and the 30th (WX310K, other color).

“I think the Willcom ‘all you can eat’ phone-and-web-surfing deals will save enough money that the phones will pay for themselves within one or two years, if not sooner,” added Keith.

How do the phones compare? Keith listed the negatives first.

“Seems there’s no PC-based PDA software to support them yet; you can back-up your address book and schedule, but not edit them on your PC.”

He says that for the Sanyo, the built-in ring tones are hideously tinny — and there’s apparently no volume adjustment for the key-touch tones and ring tones. The mailbox for sent mail holds only 120 emails – little more than couple day’s mobile mailing for a typical Shibuya teen – and doesn’t include fields for birthdays or physical addresses. Oddly, most of Willcom’s PHS models have mailboxes that support 1,000 email messages (total of sent and received). Why the tiny memory for Sanyo?

But, on the plus side, the Sanyo’s 3-megapixel autofocus camera beats those in many other, higher-end KDDI/au or PHS models (Willcom used to be part of KDDI) and the WX310 models support QR codes, full Web browsing, overseas roaming (Taiwan & Thailand) and can serve as a wireless modem for a laptop (64 kbps x 4 channels).

“The screen of the Sanyo PHS has both stunning color and enough contrast and brightness to be readable in bright sunlight; the voice quality on many PHSes is quite noticeably better that that of a [regular] keitai. I think Willcom is looking at the potential market in Taiwan and Thailand, if not China; people who cannot afford a keitai will be very pleased to get similar functionality in a PHS that costs much less per month to ‘run’,” says Keith.

He adds that he’s planning to keep his current Casio au phone and use it as a PDA once he cancels the contract and switches to PHS.

Willcom appears to be scoring points with the new PHSes as well: the WX310K includes the Opera mobile browser and will soon release the W-Zero3, a fully featured PDA made by Sharp and running Microsoft’s Windows Mobile 5.0 OS, a first for the Japan market. 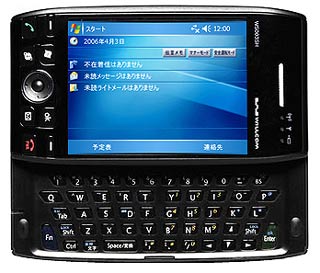 So what does all this mean for DoCoMo, KDDI/au and Vodafone? Not much at this point.?

But, as Keith mentioned at the end of his mail, Willcom appears to be pricing the phones similar to 3G, but undercutting the competition (by a large margin) on monthly fees. “[This] is a good way to lock in a loyal user base in Japan,” he says.

Time will tell if this will work. And if it does, you can be certain that Softbank, eAccess and IPMobile will enter the market with a highly similar strategy in 2006. Then DoCoMo et al will start to sweat.