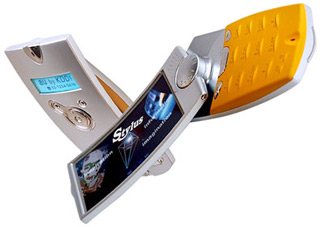 The latest models from KDDI’s au Design Project went on display this month following in the footsteps of past designer models like the InfoBar, the Talby and the Penck. Visiting Harajuku’s ultratrendy Designing Studio showroom last weekend we got a peek into the future with several new mock-ups attracting attention. Celebrating what was billed as “Tokyo Designer’s New Concept Model Week 2005,” the phone company unveiled several previously unseen prototypes, including the Machina [.jpg] and the Hexagon [.jpg], which were displayed under glass at a safe distance from fashionistas and tech journalists alike.

KDDI has hired several designers from outside the traditional OEM supply chain to help them develop innovative new models or what the company calls “communication tools that merge fashion with portability.” Takashi Nikaido, a former Casio team leader who worked on the original G-SHOCK watch design is one of them. His ‘Rotary Design’ (photo right), circa 2001, was on view along with the even more futuristic ‘Wearable’ 3-piece concept [.jpg] which he developed the same year. In 2003, Marc Newson created KDDI/au’s Talby based at least in part on an earlier design model, the InfoBar, designed by Naoto Fukasawa, who also produced the Penck. Ichiro Iwasaki, who spent several years at the Sony Design Center, created the Grappa Slider and Wallet styles and Ichiro Higashiizumi also had his two Apollo concept handsets on show (WWJ subscribers log in for the full story).

There has been a lot of speculation on the secret behind KDDI/au’s recent success. Japan’s No. 2 carrier has posted impressive net subscriber growth over their competitors during the past 18 months and, for the most part, the success can be attributed to speed and price.

The CDMA 1X network’s data speed, or through-put, has generally been much faster than DoCoMo’s W-CDMA FOMA and the company was the first to introduce a flat-rate data plan that was clearly very appealing to the heavy-user community. It’s often said that people ‘don’t care about technology’ (unless it doesn’t work), but you can’t ignore the fun of surfing the wireless Web up to 10 times faster, for basically the same price, either.

Of course, functions play a major role from the user perspective as well. KDDI/au’s slick Flash menus and GPS navigation functions, which the company also brought to market first, have distinguished their product as well. Along with enabling delivery of desirable content, which include full-song downloads and a wide selection of popular manga titles, KDDI/au have delivered a very strong cost/benefit package into the marketplace.

Furthermore, the importance of handset physical design cannot be under-estimated, and in Tokyo especially the style factor is vital. The phone is physically in the user’s hands is the most visible tool for ‘extending brand’ onto the street. By going outside the box to bring fresh ideas to the table, the au Design Project is a brilliant — if somewhat disruptive and expensive — undertaking.

Don’t think for a second that the competition hasn’t noticed; Vodafone Japan have released models designed in-house (although to somewhat less successful results at retail) and one would expect that even DoCoMo must be quietly tinkering with a few ideas out at Yokosuka Research Park as well.

Finally, here is the link to see those three latest design models.