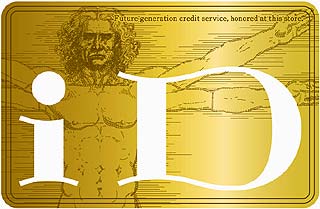 On 8 November, DoCoMo said they would start offering a new FeliCa-compatible credit card, called the ‘iD card‘ (that’s ‘i’ and in ‘i-mode’ and — we guess — ‘D’ as in ‘dominant market position’), on 1 December. The iD card will allow i-moders to make credit card payments with a FeliCa eWallet phone; Big D said the payment procedure will be “as simple as waving the phone in front of dedicated reader/writers at stores.” Now, it looks like their Flash-heavy, groovy, dedicated iD-card website is now open, trolling for prospective customers.

When you’re the dominant wireless carrier in the market, and you’ve invested billions in building a 3G network, but hoped-for packet revenues collapse when your No. 1 competitor beats you up with flat-rate pricing, launching your own credit-card brand is a sensible option. Welcome to the ultra-high-tech, but old-fashioned-business-model, future.

The new website came online today and provides just enough information to, hopefully, pique the curiosity of the i-mode-using public. There are explanations of how the system will work, which phones will be compatible and what sort of payments can be made. There are also FAQs and and contact information.

The company’s presser explained that no signature will be required for purchases under a certain amount, while purchases exceeding this amount will require the user to simply enter a password via a device linked to the reader/writer. There’s no indication in the new website as to what the signature/no signature limit will be, but a safe guess might be 20,000 yen. Suica cards issued by JR (and to be issued by DoCoMo on phones in January) presently have a 20,000-yen limit. Then, between 20,000 and 50,000, a signature would be required.

We also guess that, at least initially, the credit cards will be limited to an absolute maximum of 50,000 yen, regardless of one’s credit rating, so as to limit liability and build user confidence. FeliCa users are already quite used to using the prepaid function on the phones for payments of up to a few tens of thousands of yen.

The new credit-card phones will also be protected like all other FeliCa models; i.e. a user can call a designated phone number to immediately lock out a misplaced or stolen phone. Also, users can choose to make all credit-card payments require a password.

In what may be a global first, the iD card will be implemented via a downloadable i-Appli Java application, and not via a physical card. The ‘cards’ will be issued via several different card issuers. Earlier this year, DoCoMo tied up with the Sumitomo Mitsui Financial Group “to bring credit card payments to smart card-equipped handsets.” DoCoMo planned to invest nearly 100 billion yen in that venture, acquiring 34 percent of Sumitomo Mitsui Card’s (SMC) common shares for approximately 98 bn yen.

In the past, DoCoMo has also established FeliCa-related partnerships with Sony Finance, Sakura Bank, Sanwa bank and the Bank of Tokyo-Mitsubishi.