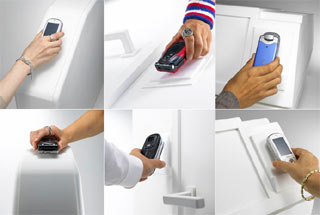 According to the ancient Chinese calendar, 2006 is The Year of the Dog. More importantly, it’s shaping up to be The Year of the eWallet. Launched last summer, DoCoMo’s FeliCa-based wallet phones are a growing success and competitors Vodafone and KDDI have scrambled to launch their own FeliCa-equipped models.

A recent survey points to wide consumer satisfaction and even the BBC have started reporting on Osaifu Keitai (wallet phones). The BBC’s ‘Click Online’ producer caught up with me last month in Tokyo; they were in town to cover CEATEC, but also wanted the tech and business-model details on DoCoMo’s ‘i-mode FeliCa‘ mobile service, as well as how people are using them. The result was a pretty good TV programme (if I may say so myself), which you can watch on the Click Online site(WWJ subscribers log in for full story).

I can confirm what I said on air to the BBC guys: eWallet phones and mobile payment services are undoubtedly one of the most significant trends as we move into the post-3G future. Given handset replacement rates, it won’t be long until most mobile users in Japan start leaving home in the morning without cash; all they’ll need is their FeliCa-equipped phone.

I heard many comments, and saw many examples supporting this conclusion during last month’s Mobile Intelligence Japan (MIJ) mission. We met with several senior people working on mobile FeliCa who said it’s a “very exciting time” and they expect significant consumer take up in the future (no names mentioned as sources did not have permission to speak officially on behalf of their companies).

You already don’t need a wallet in Tokyo for small daily purchases — just use any one of the various IC cards that run on the FeliCa IC chip. You can typically carry up to 50,000 yen and that’s plenty for morning coffee and newspaper, soba at lunch, a few groceries after work and even to have a Kirin with your colleagues at the yakitoriya. Of course, you still need a separate train or subway IC card, and I’ll get back to this later.

By October 1, there were some 25,000 shops and 6,000 vending machines nationwide equipped with FeliCa readers, according to DoCoMo. AM/PM, Circle K and Sunkus are the leading convenience chain participants. Matsumoto Kiyoshi, a hugely popular discount cosmetics chain, had readers in 600 shops.

During MIJ we heard impressive data (which are usually very closely held and not available in open sources): as of September, DoCoMo have sold 6 million FeliCa handsets of which 1.4 million are regularly used for eWallet payments — that’s a huge, 23 percent usage rate! One industry insider told us that at least 55 percent of DoCoMo customers who purchased the phones had tried the service.

KDDI, which launched a FeliCa model in August 2005, are selling 27,000 handsets per month; they have been offering a 5-percent refund on the sale of new FeliCa handsets, so this could also account for the strong sales even if none of the buyers intended to use FeliCa (the discount ended yesterday, November 10). DoCoMo also offered a 5% rebate to boost initial sales, but that ended on August 1.

Latecomer Vodafone are only launching their FeliCa model, the V703SHf from Sharp, on nationwide sales starting today, so it’s too soon to comment on their sales.

Nonetheless, all indications point to strong actual usage of the FeliCa function.

I asked one convenience store clerk in a Sunkus whether many customers used their phones to pay; he answered, “Yes, many.” Conversely, at a convenience store that does not accept FeliCa payments, I asked, innocently, if I could pay for my three cans of beer and peanuts “using my phone or Edy card?” The clerk apologized profusely that that was not possible and that he hoped his company would “adopt Edy soon as many other customers asked the same question.”

This has all got to be music to DoCoMo’s ears! All of their FOMA 3G models now come with mobile FeliCa built in, and these account for the vast majority of their new sales (2G is inexorably dying).

But in addition to anecdotes, one of the first surveys we’ve seen on phone eWallet usage was posted online by DoCoMo on October 19 (Japanese PDF). Granted, it comes from an interested player, but I’ve found over the years that, while Japanese companies don’t put much sales and usage data online, what they do post is usually highly accurate.

There are other questions as well, on likes and what types of services users would like to see in the future, but we’re running out of space here; you can access additional survey information at Seron.

The overall point is that mobile eWallet services appear to be taking off in Japan. Customers like the services, they use the services and they appear to have little worry over security or loss of the phone.

Really, losing your eWallet phone would be little different than losing your real wallet. Sure, my guess is that many more phones are lost in Japan each year than wallets, but I bet people will start treating their phones with much more care as they morph into full-featured e-payment tools.

WWJ has mentioned before that 2006 will really see eWallet usage take off, but as we heard during MIJ, everyone is waiting until January, when DoCoMo and JR East introduce ‘Mobile Suica,’ allowing you to use a FeliCa phone to get on the train; KDDI is also involved.

I agree this will definitely spark a huge increase in the rate of eWallet usage and the carrier that can make this service work first will gain a significant advantage (as if DoCoMo needs any more).

Sadly, one industry insider who asked to remain anonymous told us that Vodafone, the latecomer to the osaifu keitai market, may miss the start of Mobile Suica on JR since the companies involved in launching the service for DoCoMo, KDDI and JR East simply have their hands too full to work on a Vodafone version.

If this rumor is true, DoCoMo will launch Mobile Suica first early in 2006, followed by KDDI at about the same time and then Vodafone will start, possibly only several months after D and K start ringing up stunning new sales.