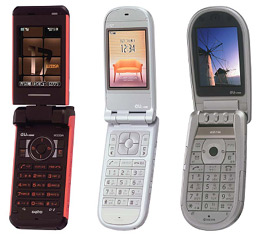 Japan’s KDDI is promoting three new handsets coming out later this month that they believe mix fun with functionality for a package of business and entertainment features.

The W33SA from Sanyo, W32T by Toshiba and Kyocera’s A5515K each pack a push-to-talk style function. The trio of handsets comes equipped with Hello Messenger, a live audio-chat style service for up to five people that supports voice, image and text simultaneously. Twelve original cartoon-style avatars by well-known Japanese illustrator Kohei Yamashita will frolic on screen as stand-ins for chat members who can type or talk through the conversation over the handsets.

Targeted at young, female users, chat members register each other’s number in their handset to get started. Prices for the service of course vary depending on if subscribers have a flat rate package or not. If not then there is a charge incurred for sending photos or data. A special introductory rate for the audio portion of Hello Messenger until April, for example, will be 1.05 yen per 20 seconds. Scheduled to start service in late November.

Sanyoâ€™s W33SA is much more than just a â€˜chat room to goâ€™ in fact it has features Japanese canâ€™t even use yet. The handset comes equipped with a built-in TV tuner for digital terrestrial TV broadcasts plus a new TV GPS function that will provide links to key words in certain programs. The links will connect subscribers to the EZ Navi Walk GPS feature guiding them right to the restaurant, shop or event mentioned in a broadcast. Dubbed EZ TV One Seg (Seg for segment, it must mean something to somebody at KDDI), will also search for theme songs or incidental music from TV programs, look for the actual programs themselves and if users pay an extra fee, provide prompts to programs based on keywords logged by the subscribers. Of course that wonâ€™t be available until the actual start of terrestrial digital broadcasting on April 1st, 2006 â€“ though they can view analog TV. Costs for the EX TV Single Support service starts at 210 yen per month ($1.78). It comes with an FM Tuner, 2.4 inch screen, 3.6 megapixel camera, PC site viewer and pumped up sound functions for music play, an IC recorder, the list just goes on.
Â
Hello Messenger aside, the W32T by Toshiba boasts a PC/Web site viewer, 2.4 inch QVGA screen, Bluetooth capability that will synch it with users PC and printer, stereo speakers and â€˜pair functionâ€™ email, which the W33SA also has, can send mail simultaneously to up to five people on your list and a 2.3 megapixel camera. It is also capable of loading advanced 3D graphics for games and the SD memory card can playback Video recorded on the TV or other devices. An enhanced Print Image Matching III engine pumps up mobile print quality.

Kyoceraâ€™s A5515K comes with a 3.2 megapixel camera featuring number of options, comes also with a number of navigation and safety features including the Anzen Navi (safety navigation) that sends an email to registered friends of family telling them you have arrived safely at your destination.