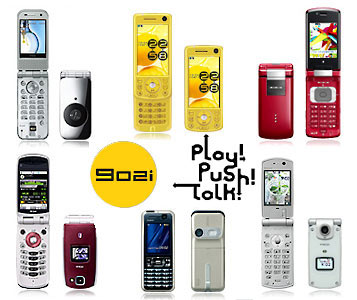 NTT DoCoMo have just announced the new 902i-series of 3G FOMA handsets, featuring the new “PushTalk” walkie-talkie-style communication service. PushTalk will run over the 3G packet communication network and will allow phones to be used like walkie-talkies for simultaneous, one-way communication from one 902i user to as many as four other 902i users. The service will be launched in the near future concurrently with the 902i-series. DoCoMo said they are planning to waive communications charges (5.25 yen for each one-way call) through the end of December 2005.

The announcement confirms recent rumours (reported on WWJ) that the giant carrier would market a walkie-talkie-style service, already popular in the US, to defend falling market share and respond to flat-rate voice and data products offered by KDDI/au, Vodafone Japan and Willcom.

The announcement is Here and they have set-up a groovy Flash Site to take a peek at the new handsets as well.