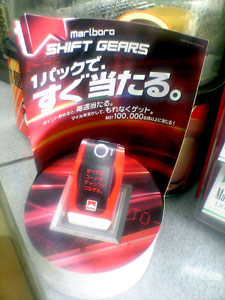 Here’s a slick way for Philip Morris to tap into their customers, within the well-established pack a day distribution network, using mobile. Running from early September through the end of December, Marlboro cigarette packs will have a unique lotto number under the lid allowing registered members to win branded merchandise on the spot ranging from lighters and ball caps to larger weekly prize draws for jackets and mountain bikes. The grand prize trip to Italy for some hands-on F1 gear jamming!

Clearly an innovative approach to tap into, segment and reward the companies loyal base. While it’s not the first time they have run at ‘coupon code’ campaign, the QR driven approach – created by part of the same crew who earned a Golden Lion at Canne for Vidal Sassoon – this should definitely render more valuable meta data results than 1994. Watch the show&tell video [26mb - .mp4] to see the process in action..