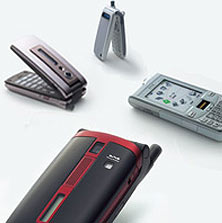 Japan’s Willcom will launch four PHS mobile handsets this November packed with many of the same functions as high-end DoCoMo or KDDI models. Functions for the WX310K and WX300K both by Kyocera; Sanyo’s WX310SA; and JRC WX310J include a PC document viewer, NetFront V3.3 internet browser, Intellisync for Outlook, fingerprint authentification, music player, pixel reader, macromedia flash, even Bluetooth — all at rates the bigger carriers will find hard to match.

PHS (personal handyphone system) subscriber numbers, long in free fall against 3G mobile carriers, are slowly climbing back from the abyss thanks to low-cost fixed-rate subscriber packages that are saving consumers bundles of yen. Currently Willcom has an inter-service flat call rate under 3000 yen ($26) per month. The company has announced they will introduce a flat rate mobile data fee of just 3,800 yen ($33) to coincide with the release of the new 300/310 series. PHS subscribers will be able to dig in to a full buffet of mobile services for around 6,700 yen ($58) a month.

The company has fielded PHS services since 1994 as DDI Pocket. Last February came the name change to Willcom. Competitive pricing and feature-packed handsets are working to push Willcom and the PHS sector back into positive numbers. Willcom had a total of 3.36 million subscribers as of August. Summer brought a rush of new subscribers: June 80,000 new users; July 70,000; August 60,000. US-based Carlyle Group controls 60 percent of the company followed by Kyocera with 30 percent and KDDI holding ten percent. Willcom also markets a high speed wireless data communications service,
Air Edge for WiFi connectivity. Consumers can expect to pick up one of these handsets starting at 10,000 yen ($87).

Here a list of some basic features on the Willcom Fall lineup: