Disney Branded Cell Phone: A Sign of the Times 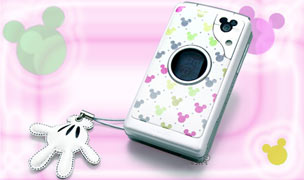 It’s not the first time that we’ve seen a major brand license a well-known icon to create a designer cell phone. Recently, Ferrari joined the bandwagon with a custom-tailored device for Vodafone, available now in Europe and Japan. WWJ thinks many of the usual suspects (cars, sports, fashion, music) are likely to follow suit into the 2005 year-end gift-giving season as well. With music-enabled phones achieving white-hot popularity, perhaps we’ll see boutique handsets dedicated to ABBA, the Beach Boys or even Courtney Love (maybe not since Hilary Duff beat her to it), preloaded with all their ‘greatest hits’ and available just in time for Christmas.

But why stop there? Other global brands (even obscure ones) must be thinking ‘me too’ about now as well; Gucci and Playboy come to mind along with every major league sports team — and don’t forget block-buster movies (a real ‘Bat Phone’ would be very cool). So, what does any of this have to do with Japan you might ask? Plenty.

Japan is extraordinarily well-suited to lead the branded cellphone trend — both on the consumer sales and device manufacturing side.

For starters, Japan is a brand-name driven market like few others and consumers here have a proven natural tendency to upgrade to the newest and coolest handset as a matter of course. Adding fancy charms, stickers, LEDs and custom face plates to personalize one’s phone has been big business for years.

More than just a stylish ring tone (Oh, so 2001…), many people want their handset to make a fashion statement about who they are as well. Just take a look at this incredible image archive collection of straps, dating back to 2000, via Keitai Watch, and worthy of a stand-alone story on its own.

Second, the handset makers here have driven design innovation as a result of competition between the dozen or so OEMs fighting it out for market share.

Big brand names with an eye for quality products will think twice before allowing their custom models to be made by a no-name company. The Hello Kitty and Ferrari examples have made that point crystal clear, coming from Sony Ericsson and Sharp, respectively. Japanese makers are used to delivering short-run, highly specified batch orders… in other words: high quality and low volume is their specialty. While makers here are loath to let camera-toting journos into their factories, the conversations we’ve had with insiders indicate that most phones are (more or less) lovingly hand assembled — no wonder the before-subsidization price runs in the JPY 30,000-60,000 (and up) range.

As the industry approaches what seems to be a glass ceiling with respect to new functions and features that can be added to a mobile phone (Many people ask us “What’s coming next after TV and wallet services?”), we think that distinctive brand and styles is one area that will will see growing activity.