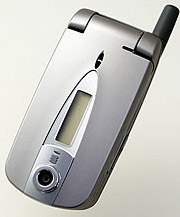 NEC Corporation today announced that it has developed its first i-mode 3G terminal “N600i” for an operator outside Japan and has commenced delivery of the terminal for COSMOTE, the largest mobile operator in Greece. COSMOTE, celebrating i-mode’s first year in the Greek market, is the first i-mode operator in the world, after NTT DoCoMo in Japan, to introduce the 3rd Generation i-mode, next generation innovative mobile Internet services. The new terminal is the first 3G (W-CDMA) and GSM/GPRS-capable i-mode terminal outside Japan.

With i-mode, COSMOTE made a significant breakthrough in the area of advanced data services. The company’s priorities for the coming years include the development and expansion of data services in Greece and the markets in which the company operates in South-Eastern Europe, the increase of their participation in the company’s total revenues, the reinforcement of its customers’ loyalty and the maintenance of its leading position in the market.

As part of NEC’s new 3G (W-CDMA and GSM/GPRS dual mode) mobile terminal platform strategy for global business, NEC employs not only its own proprietary platforms for high-end flagship 3G models but also incorporates the best of breed of platforms to bring an attractive and broad product range to the market in a timely and effective manner. The new 3G i-mode terminal is the first mobile product arising from its new strategy.

N600i also features a 2 inch 65K QVGA main LCD, capable of displaying not only high-resolution pictures but also MPEG4 movies. Developed based on expertise acquired from the mobile Internet markets in Japan and Europe, and comprising 72 tone polyphonic ringtones, DoJa(R) JAVA Applications and a wide variety of connectivity technology such as Bluetooth and USB, N600i is highly suited to accessing mobile Internet applications and rich contents. Its 20MB embedded memory and Trans-Flash memory card enable storage of large amounts of data.

Today, apart from NTT DoCoMo, i-mode services are also available through BASE in Belgium, Bouygues Telecom in France, E-Plus in Germany, Far EasTone in Taiwan, KPN Mobile in Holland, Telefonica Moviles in Spain, Telstra in Australia, Cosmote in Greece, and Wind in Italy. NEC is supplying i-mode terminals for all of these operators, and is currently preparing for the launch of Mobile Telesystems in Russia. Four new operators, Cellcom in Israel, O2 in Great Britain, and StarHub in Singapore, have all signed related agreements with NTT DoCoMo, and are expected to launch i-mode shortly. i-mode service users currently amount to 5 million outside of Japan, increasing the total amount of i-mode subscribers to approximately 50,000,000 worldwide.