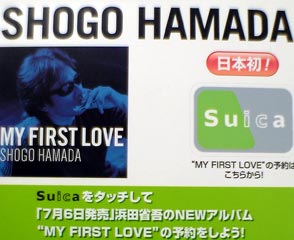 Suica’s IC card technology has been a runaway hit in Japan. More than ten million are in circulation around the country and the service has brought in numerous retail partners for cashless payments at shops and restaurants within the stations. It was developed by Sony together with Japan Railways East Corporation and will soon migrate from hands to handsets. In January 2006, DoCoMo plans to combine their Felica smart card e-money platform with the Suica commuter card into a series of mobile handsets.

Free-standing poster display units have been set up in Shinagawa, Tokyo and Ueno Stations –- all giant commuter hubs.

Denki Posters are proving to be a popular and dramatic ad medium. Most displays are set up in large public areas such as train stations or shopping arcades to minimize any chance of vandalism (click on this link for a large-scale electronic poster display using Oki technology at a JR Station; the 16 50-inch displays synchronized with wireless phones and PDAs). Incorporating IC card readers into this medium, as the Shogo Hamada campaign does, brings in a new but not unexpected element.

Cards also separately activate a speaker unit built into the Shogo Hamada denki posta broadcasting short selections from the album (click on the Flash button on the far right poster by Oki Electric to see one in action).

KDDI and Vodafone plan to join the Felica system and inevitably bring Suica functionality in as well. Since Sony also developed Felica, it’s a win/win, break-out-the-cigars-and-champagne situation for them. Shogo Hamada, too, is part of the family. He is under contract to –- Who else? — Sony Music Entertainment.