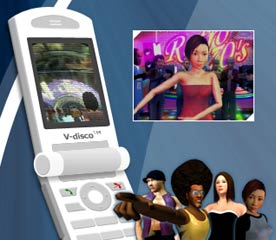 Users and visitors to the virtual disco select an avatar persona for themselves and join the party in the club’s three interactive levels. Club goers select genres and songs from the club list, listening to their tunes while their avatar strolls along chatting â€“ if they choose â€“ with other party people in real time and checking out 3D animated characters moving to the beat. Avatars act as guides, companions or dancing doppelgangers. Though the figures retain a slightly cylindrical, rubbery look the V-Disco has a fun Dance Dance Revolution feel to it with a good backbeat.

Artificial Life is localizing the product for its many Asian markets by including a mix of international and regional music favorites. Blending real and artificial life forms, V-Disco will host popular musicians promoting their music in avatar mode at the Discos. Contests and giveaways are planned for these and other special events including avatar modeling and dance contests.Â

Founded in Boston in 1994 and headquartered in Hong Kong, Artificial Life made its name in artificial intelligence and intelligent agent/smart bot technologyÂ  listing on America?fs NASDAQ back in ?f98. One of their most innovative mobile products is V-Girl, the virtual girlfriend. Cute and sexy in a thin Japanese anime fashion â€“ lots of pouting and leaning forward in low cut tops, lingering looks over the shoulder, bath time fun?c This sophisticated 3G game is comprised of 20 game levels each with complex graphics and fully realized backgrounds with a real game console look to it. Each level poses different challenges to players, with the ultimate goal for them to date and even ?emarry?f the virtual girlfriend. Mini-games and an RPG are built-in throughout. However, the game does not end at the ?emarriage?f as it is designed as an ongoing interactive story that continuously evolves and develops. With thousands of high quality 3-D animation video clips and audio streams, players are able to keep their dating experiences ?gunique?h says Artificial Life. Just the word we?fd choose.Â

V-Girl just launched in Taiwan and we should be seeing it on Japanese cell phones once contract details with all three carriers are ironed out. V-Girl will prove especially popular with the Japanese Otaku social outcast class that haunts Akihabara, though it?fs somewhat ironic that this anime-influenced world originated outside Japan.

Ah 3G, we can flirt all day and dance all night all without ever leaving our handsets.