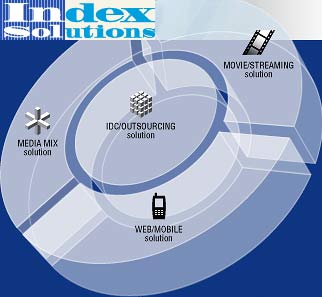 Index Corp., a Japanese company specializing in creating content for mobile phones, is rounding up TV contracts aimed at specialized interactive services linking mobile handsets and television programming. A story in the Nihon Keizai business daily reported the company was on the verge of issuing around 20 billion yen in shares to four other broadcasters including Nippon Television Network, Tokyo Broadcasting System, Fuji Television Network and TV Tokyo. When asked by WWJ, Index would say only that parties concerned were in negotiations and nothing could be confirmed yet. The news, confirmed or not, drove Index shares up 9.5 percent on the JASDAQ on 25 May. Both TV Asahi and Fuji Television already own around 1-2 percent of shares in Index.

The company is currently in partnership with five broadcasters for a remote control application that displays TV listings for the whole country on mobile phones. Launched in March, TeMo Chan is free to download, works with all carriers and also provides access to official mobile sites of TV programmers. Partners are Tokyo Broadcasting, Fuji TV, TV Asahi, Nippon Broadcasting (NTV), TV Tokyo.

Together with TV Asahi and Fuji Television, Index also provides the smarts for interactivity on special broadcasts. One show featured an IQ test viewers could try at home on their phones and more such projects are planned. Mobile contents are the backbone of Index with a long list of creative services. After all, the company positioned itself in the mobile marketplace very early — just as i-mode began to catch on.

In an email to WWJ, Index says much of the mobile TV content they are developing will be available on all three carriers and should be free rather than subscription-based. Though they do not yet own any shares in TV stations (flash back to the Livedoor/Fuji TV/ Nippon Broadcasting debacle?) the company admits they “may in the future.” Unlike Livedoor, Index has been careful to tread softly, softly and make corporate friends wherever they go.

According to their reply, Index is the only content supplier of its kind to maintain such a cozy relationship with so many broadcasters, and that neither Cybird nor Access (both leading mobile Internet solution/content providers) hold contracts with five TV stations. The company has come a long, long way from its origins as provider of a mobile fortune-telling site, the ‘God of Love’. They have acquired 42 firms, joined in the Takara and Tomy Toys merger and raised around 30 billion in yen since taking Index public.

The idea of interactive TV (and program-centered shopping) has been kicking around for years, remember Microsoft TV? There have been many tech efforts to involve viewers in programming (TiVo does not count, as it’s the viewers who slice and dice TV content leaving out the julienne fries if they choose). Back then, it was a closed TV/smart remote loop. Now it’s barrier free â€“- or will be soon.

Engaging viewers outside the home will take more than clear reception. Companies like Index are prompting broadcasters with solutions to take box-based TV broadcasting/advertising and tweak it for handheld receivers. These new mobile/TV revenue streams could swell corporate coffers. A Nihon Business daily report said downloads for program guides, ring tones and other mobile services netted Fuji Television around 3 billion yen a year.