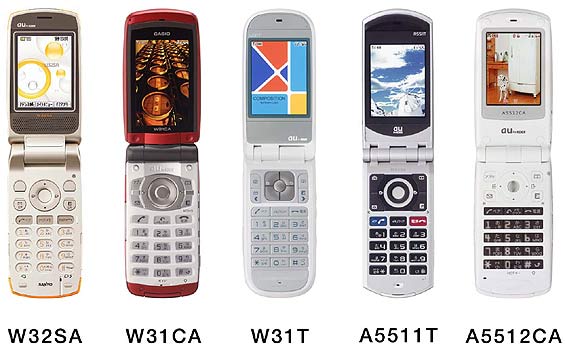 The handsets: W32SA by Sanyo; W31CA by Casio; W31T from Toshiba; A5511T also Toshiba; and the A5512CA by Casio. They integrate a mix of music and business functions: download capacity for attached mail has been expanded and one of the models, the W31CA, has a 3.2-megapixel camera, which is pretty good (but not as good as DoCoMo’s latest).

Parents and perhaps a significant number of spouses will applaud (or vilify) Safety Navi?fs Big Brother GPS location minder. KDDI?fS new service has users set certain destinations through the phone?fs navigation network â€“ school, work, club, wherever. When the person arrives at the designated area, the phone sends an email to a family member (mom/dad/husband/wife/parole officer) and when they leave it sends an email as well so loved ones â€“ or god forbid the boss â€“ knows you are on the move. The service is designed with nervous parents in mind; high profile crimes against children have families and schools on edge here. Spin offs to businesses with wandering employees and spouses with wandering lovers to keep track of seem inevitable.

W32SA works as an infrared remote control for TV and in the car can function as a transceiver for domestic FM stations via Chaku Uta full mode (full song download). Safety Navi is built in and there is an autofocus 1.26-megapixel camera.

A5512CA is equipped with a 1.28 megapixel camera; compact body styling, lots of watch-style features from a stopwatch and countdown timer to analog clock; Safety Navi, plus a 80 decibel safety buzzer for those long walks in the dark.