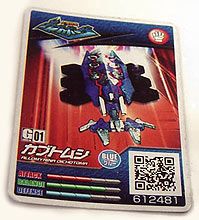 Giant beetles are big business and big fun in Japan. Toy maker Tomy is capitalizing on the current Japanese craze for all things beetle by introducing a mobile game and information site for their line of spring-wound Kabuto Borg GU toy battle ‘bots (Kabuto is short for Kabuto Mushi, horned beetle) that battle Sumo style until one is knocked over. Two collectible Kabuto Borg cards — a beetle card and power up card — are included with each of the newest series of Kabuto Borg toys (819 yen/$7.80) and custom part sets. Cards are stamped with a QR code that links to a mobile website compatible with all the carriers. The site has an information center for battle Borg news; a list of Borg ‘bots and their custom parts; and a Kabuto Borg GU battle game. The game is an “java-appli” so once it’s downloaded users can play without worrying about connection time and fees. QR codes on different cards allow access to a variety of playable battle beetles and power-ups on the mobile game site. More cards equals more beetles, fun and Kabuto Borgs sold.

Tomy is just one of many mobile game makers that use QR codes to draw users into mobile game sites. At the last Tokyo Game Show DoCoMo partnered with game makers like Square, Taito and Atlus, to create a stack of collectible Game Cards stamped with QR codes linked to DoCoMo game sites. Collectors received one card for every game they tried on the cell phones at the giant DoCoMo booth.

QR codes are Japan’s push mechanism of choice all across the marketing spectrum. Sort of a super barcode, QR Codes used here were developed by Japan’s Denso WaveÂ and can encode up to 7,089 characters including Kanji, Kana, Hiragana, alphabet, numeric, symbols, binary, and control codes. Users take a photo of the code which then link automatically or with one-click to a mobile website.

The explosive use of camera phones has transformed the little black-and-white QR widget into a ubiquitous marketing tool, popping up in magazines, posters, collectible cards, business cards, game ads â€“ in short any business that wants a fast line of contact to consumers. Personal QR stampers â€“ a sort of mobile business card â€“ debuted over the winter from ShachihataÂ and Print Ookoku and personal QR cards are free to print out at KDDI’s Harajuku Designing Studio. During the Fall, FujiFilm launched a unique QR code printing service for New Years cards with an individual QR code that linked directly through the mobile phone to user’s pre-recorded personal (or business) voice message/greeting/rampage. DoCoMo maintains a QR code how-to website so users and content makers can easily develop codes themselves.

Tomy’s mobile game, as cool as it is, is just part of a Japan-wide beetle phenomenon Wireless Watch readers might want to synch up with as well.

Japanese kids and adults have a longstanding fascination with raising giant horned beetles during the summer months. Domestic Kabuto Mushi (horned beetle), Rhinoceros Beetles, Hercules Beetles, any boy worth his butterfly net can rattle off a list of names and attributes of favorite bugs. Beetles entered the electronic age with a vengeance a couple of years ago via Sega’s masterfully addictive interactive Mushi KingÂ card scanning arcade battle game. Players pop in 200 yen and receive a full color card of a specific beetle. Each card is barcoded with data for that particular beetle’s attack and strength level. Scan the card and click in choices for attack and defense against your opponent.

The purpose is to play through all the difficulty levels scanning in different cards to cue in defined â€“ and very complex — strategies for attack and defense against other beetles. Each card has its own advantages and disadvantages depending on the opponent. Want a new card? Play again– and again and again. The game has enviable replay value as players attempt to collect beetle series and rare cards with powerful attacks. (Collectors make extra cash selling cards through online auction sites.) Complete the game and receive a secret code to input into the online siteÂ for in depth info on beetles and Mushi King. New series of cards are issued on a regular basis and the game undergoes a transformation as well.

Around 10.5 million cards are in circulation according to Sega with 8500 Mushi King machines crowding arcades. Beetlemania has emerged as a huge marketing powerhouse. An animated Mushi King TV series began this spring and Gameboy Advance launched a Mushi King gameÂ at the end of April. The company has shipped English versions of the arcade game to Taiwan and Singapore.

Sega’s newest venture is the OsharemajoÂ (fashionable witches) card scanning game for girls. Based on the same concept as Mushi King, girls collect outfits and hairstyles instead of battling beetles, which they scan onto their characters during the witches’ adventures. Another spin-off, a dinosaur card battle game, should reach Japanese arcades in the near future.

With no arcade games in sight, Tomy has opted for Mobile Games and a Kabuto Borg web comic
to keep the fun going with QR codes as their push mechanism. Mushi King, however, remains the reigning monarch of the battling bugs.