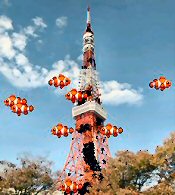 KDDI will export BREW-based mobile game know-how to American telecoms hungry for advanced mobile content. Game producers Interactive Brains and Mobcast Inc. are KDDI’s first partners in this venture. Mobcast will initially supply two games: a quick-draw shooting game, ‘Hayauchi Gunman’ and ‘Photo Aquarium,’ which lets you decorate pictures on a mobile phone with a mobile aquarium. Interactive Brains will provide a high-speed 3-D racing game, Lightstream, available here on Vodafone and au. The content will be offered by the Japanese game makers with KDDI providing collection services and taking a cut of the action. The company also intends to localize game software itself for marketing and distribution on overseas networks. According to Interactive Brains, their game is scheduled for release in the US between late summer and autumn.

Brew is KDDI’s platform of choice and one that should be easy to integrate into US handsets operating on CDMA networks. Given the rich variety of game contents KDDI’s EZ Game Street boasts, fat with top game makers like Square Enix and Konami, we can’t help wonder why they started with these particular games from two rather moderate-size game companies (Cutting their own deal directly, perhaps? — Ed.).