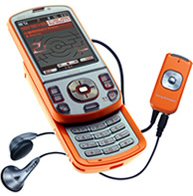 Consumers were initially slow to replace 2G handsets but resistance was futile. A barrage of slick ads and enticing features combined with the general mobile mass hysteria for entertainment-on-the-go have Japanese running to electronics retailers and cell-phone boutiques. Subscribers to DoCoMo’s 3G FOMA service have currently reached about 11.5 million and KDDI boasts nearly 18 million. Both cellcos have a seemingly endless lineup of new phones for every sort of consumer.

Last month WWJ mentioned DoCoMo had released the N700i from NEC and P700i by Panasonic, the last in their 700i-series of lower-priced 3G FOMA handsets. The N700i from NEC is after the young working/college women demographic and is the first FOMA handset preinstalled with Disney characters for standby screens, incoming/outgoing calls, mail, etc. — merely the beginning of this phone’s cuteness quotient. ‘Decoration Videophone’ splashes hearts and other pictures that overlay the caller’s image and move in sync with the caller’s face and ‘Petit Message’ enables text to overlay the caller’s image for even more expressive videophone communication. And owners can purchase all sorts of custom phone jackets to dress up their handset in 33 color combinations.

DoCoMo’s new Visual Check feature enables the caller to temporarily substitute an image in place of their actual face when receiving a video call so they can complete beauty touch-ups before switching to live video. (I heart DoCoMo!)

KDDI fired its own salvo on 14 April with a new 3G CDMA 1X WIN model. The W313 by Sony Ericsson comes with headphones and stereo microphone. It is as much portable audio gadget as cell phone with access to the music download ‘EZ Chaku Uta Full’ service and KDDI’s EZ Music channel; it also incorporates an FM radio receiver. Sonic Stage Ver. 3.0 comes preloaded for easy download of CDs onto the handset’s removable SD memory disk.

Is it any wonder that JEITA predicts in the same article that they expect strong growth to continue through March.