WWJ’s director of digital media Lawrence Cosh-Ishii was on the platform at JR Ebisu station on Tokyo’s Yamanote circle line earlier today and spotted a new ad for Vodafone’s V603T by Toshiba [ .jpg image ]. The Toshiba model and its partner, the V603SH (Sharp), released in February, both feature much-improved analog TV and FM radio functionality and the Sharp model has a built in 3D motion sensor. The ad campaign and the new cellys highlight Vodafone’s continued development of cutting-edge 2G models.

“The roller coaster ad helps target these phones at a young, entertainment-seeking demographic,” says Vodafone’s Matthew Nicholson, explaining that the theme is aimed at those who enjoy entertainment and games. “We’ve become known in the market for the best mobile games — we were the first to introduce 3D polygon graphics and multi-kilobyte Java — so we’re aiming the motion sensor phone at the young gaming crowd. There are still customer needs for 2G.”

The train poster shows the Toshiba model and invites prospective users to experience the improved TV functions (catch-phrase text is hidden by the JR train at lower left of image). Nicholson says that Vodafone’s TV phones have become relatively popular and that these new models are a big improvement over last year’s First-Gen models which basically comprised traditional clam-shell cell phones with a simple TV tuner built in.

“These new models offer specialized TV features including an improved recording function. Also, you can access the EPG, a built-in electronic programming guide giving TV program information so you don’t actually have to access the Vodafone live! menu via the browser,” says Nicholson. He says that with the Toshiba model, all you have to do is rotate the upper body shell 360 degrees to the viewing mode and the TV automatically comes on.

While mobile battery life remains weak at just about 1 hour, the Toshiba model comes with a custom cradle allowing desk-sitting users to plug into a wall socket and watch unlimited TV at the office or while minding the kids. “It’s a popular usage for journalists and others who wish to monitor TV news, for example” says Nicholson. In addition, the Sharp phone’s motion sensor automatically switches the TV image from vertical to horizontal as you rotate the handset.

Nicholson won’t state precise sales numbers, but did say the company is pleased with initial results. the Sharp model went on sale nationwide on 18 February while the Toshiba has been released incrementally based on handset color (it will be available nationwide as of the end of this week).

The company appears to be targeting the motion sensor — the first in the Japan market — at mobile games, hoping that the 3D movement functionality will enable enhanced game action (move the phone left, your game golf swing swerves left), while the TV (and FM radio) functions in both will appeal to almost anyone.

All in all, these models are fairly impressive but they highlight Vodafone’s unique position as the sole carrier devoting significant resources to developing new 2G mobiles. DoCoMo, for example, still develops boutique and designer 2G models, but their flagship effort is devoted to 3G; Big D announced last month they would stop running their light-weight PHS system and they will eventually phase out 2G altogether. KDDI only develops 3G models now (although a group subcompany, Tu-Ka, still runs a 2G system).

While a lot of criticism has been heaped on Vodafone as the carrier lags badly in the 3G race (including in these pages), wireless watchers shouldn’t forget that there is still a business to be made from, and willing customers for, possibly funkier, 2G handsets. 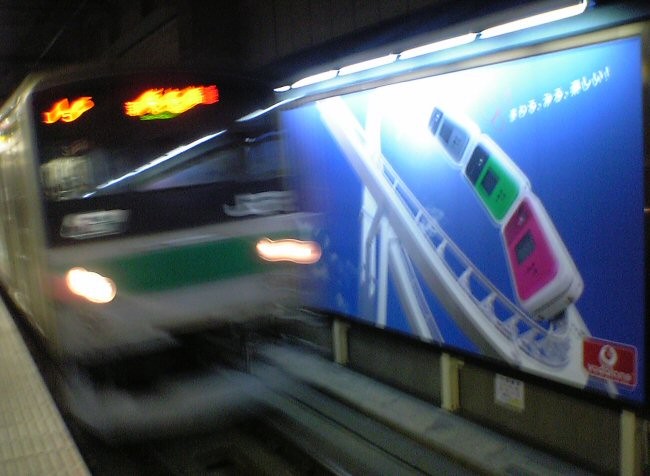