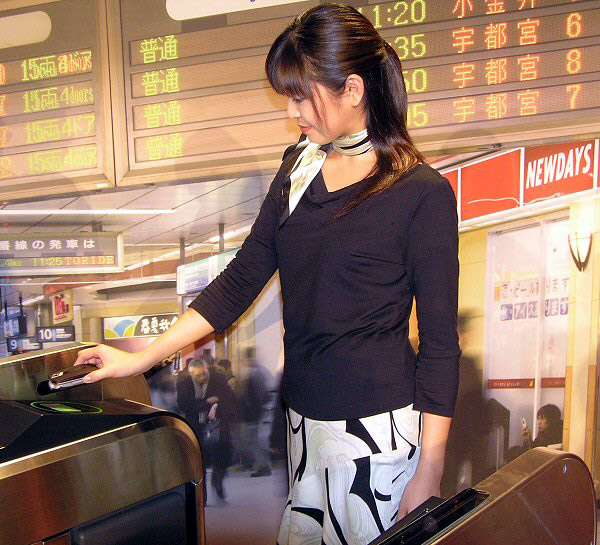 Mobile Suica’s debut comes as no surprise to industry observers. With Sony holding the reins on both the Suica and FeliCa contactless IC technology, it was only a matter of time before they fused together in one convenient hybrid gadget. FeliCa Networks, Inc., a joint venture established by the three companies, will develop IC chips for the Mobile Suica service and service applications. Sony is the top shareholder with 57 percent; DoCoMo holds 38 percent and JR East a very minor 5 percent share.

FeliCa Networks is headed by Soichi Kawachi, an urbane and experienced Sony hand with long experience in handset design. Kawachi has worked for Sony overseas and is fluent in English and French and has been busy since last year getting the JV onto its feet (WWJ interviewed him when he was still at Sony Ericsson).

Suica has already proved itself a success with over ten million IC cards in use. Swipe-and-go, the re-chargeable Suica card system processes train commuters at a rate of more than one per second but is also funneling travelers to in-station convenience stores and fast food outlets where it acts like a debit card.

Speaking at the press conference, East Japan Railways (JR East) Chief Executive Matsutake Otsuka noted that Suica is currently used in around 80,000 non-transport transactions a day. With the new DoCoMo tie-up, Otsuka predicted that number would reach far beyond that.

Suica is currently restricted to JR East and a few other train services. The group hopes to take it (and Mobile Suica) nationwide and Otsuka says they are talking with a number of public and private subway, bus and train companies.

JR East sees Mobile Suica as an ideal way to free up more retail space at many stations. If reservations and ticket sales are completed over mobile phones, the company can close down some of its reservations centers at mid-size and even larger stations — using the space for more profitable ventures.

As of February, top telco DoCoMo has sold two million FeliCa-equipped handsets. DoCoMo President Masao Nakamura said at the press conference the company believes they can increase that number to “ten million by 2006.” The fusion of e-wallet functionality with Suica’s mass transit appeal is a compelling combination. In 2006 Japanese consumers will have the option of keeping their cell phone number no matter what carrier they jump too. DoCoMo is hoping Mobile Suica will be one very convenient reason to stay with the i-mode brand.

DoCoMo’s Nakamura acknowledged during a Q&A session that though he could not predict the mobile business environment in 2006, a similar system might eventually be available on other carriers. KDDI is developing their own brand of FeliCa services and may have their own e-wallet series out as early as fall 2005.