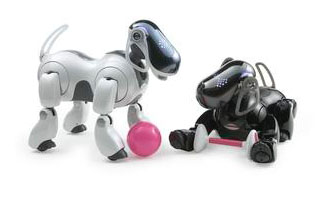 Sony’s new-wave handheld PSP game device breaks on Japanese shores 12 December. Unfortunately, anyone beyond the Land of the Rising Sun will have to wait until March (maybe) to get their hands on one. Those with a wad of yen (dollars or Euros) to spend, though, can plunk it down right now on another Sony entertainment gizmo — one that sits on your lap instead of in your palm. Enhanced wireless connections have Sony’s newest version of their PC pooch Aibo sitting up and playing music, taking photos and dancing to a wireless beat.

Admittedly, ‘Robot as Pet’ is still a difficult concept to get around. Sure, some people prefer the touch of cold, hard metal on their skin rather than fluffy fur — but generally they don’t answer to the name ‘Pet Lover.’ (Though they may follow similar commands, “Sit! Beg!”) Even Sony seemed to realize their dog ‘bot needed more to justify its high price than just playing fetch and lurching slowly (very slowly) after its little plastic ball. The company has redesigned and repositioned the shiny ERS M2 version of Aibo as an enhanced audiovisual machine.

Owners control, program and navigate the new improved Aibo on a wireless leash downloaded from a PC computer via WLAN.

The pup plays back digital music files (WAV, MP3 and WMA) or CDs, streaming music out its little woofers and chatting via a TTS (text-to-speech) module. That’s right, it can speak — at least what you tell it to say. A built in head-cam allows remote access for Aibo vision no matter where you are as long (as there is a designated PC connection for communication).

The robot’s digicam functions get an added boost with the addition of video recording capabilities. Part of the Aibo vision function, the camera allows owners to receive email and attached photos directly from the dog. (Never thought I would see those words together in one sentence.)

Sony is also pushing Aibo as vigilant WatchBot since the camera can be motion-activated to record unauthorized movement; of course, what you would probably see is a view of your house receding into the distance as the burglar carries your little silicon pal, together with his bone, ball and recharging station off, into the night

Sony’s WLAN Manager 2 allows for easy wireless LAN set-up. The remote framework for Aibo ERS M2 is a Windows PC application development environment based on Visual C++ and owners can modify their pet’s actions on the PC via two levels of coding. Aibo’s R-CODE scripting language is similar to BASIC and the easiest format for creating simple custom programs. More complex — but still not rocket science — is the OPEN-R technical architecture, Sony’s standard interface for its entertainment robots. Technical stats, research and everything Aibo is available at Sony’s American and European websites.

Actually, all this functionality is rather creepy — think about it. Since owners can control Aibo from remote locations, speak through his mouth and watch and record what it sees, they can now terrify the heck out of Grandma, the kids and visitors as Aibo turns up unexpectedly and growls, “I know where you are and I saw what you did.” Guaranteed to have them run screaming, waving their arms above their head. And owners have the added perk of recording the fun as it happens for later repeated playback as a video clip on the PC.

Aibo’s list price of US$1900 may seem a bit steep for a walking mini-stereo-slash-wireless voyeur-slash watchBot, but if you add up the cost of a PSP handheld and all those games you will have to buy to fit that new system, the bot’s cost may not seem so outrageous.

Besides, with the wireless functions you can create your own online reality game, especially in the horror genre. (Playing the theme from “Psycho” Aibo pushes open the bathroom door, “Here’s Johnny!” AAAHH!)