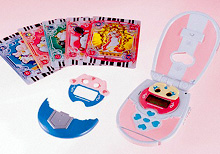 Before all you Die Hard gamers on a post E3 convention rush get too excited, note we put quotes on “Next-Generation…” because this one is recommended for the age-6-and-up crowd. Also, to those business/suit types who are about to click away and search for “ARPU” and “Wi-Fi,” you might want to pause and read between the lines. OK, onto the skinny… Bandai have recently launched this very cool — a la Japanese style — clamshell handset to an eager young target market. In fact the handset was the must-have item during Japan’s recent Golden Week shopping spree… think Tickle-Me-Elmo-type hysteria. The “Card Commun” unit retails for about US$30 and features an onboard swipe function for the collectable character card-series based on Toei Animation’s popular Sunday morning cartoon show “Precure.” Simply put, this is like Pokemon and Tamagochi combimorphed, with a cycle or two of steroids tossed in! What really struck us was that while of course there is no voice function — or monthly call charges — it does have a P2P sync feature built in so kids can share content by joining their handsets together.

“How do you guys come across all these cool, future-leading, cutting-edge stories anyway..?!?” you may ask. Well, we had the in-law brood over to visit (and run amok) during the recent holidays and can report that chaos ensued when they started playing with this new toy. The results were… in short… Awesome..!!! Now I want one too.. Really.

The first thing I noticed just by the style and characters was that this system seems to be more suited for young girls (still want one though), which actually makes sense considering hardware for the boys in that age group (Gameboy, etc.) are already well established.

Even more interesting is the fact that these girls are really honing their keitai skills; damn they are faster thumbers already! Keypad performance isn’t hindered by the fact that the button layout is almost identical to that of a keitai.

The lucky kids who set their fingers dancing on this toy will almost certainly end-up using the real thing someday soon. Hence the “Next-Generation” title for this article. You would have to think that some subliminal brand loyalty is being built in here as well, and we wonder when (not if) Bandai will port these ‘games’ onto the i-mode platform, too.

So why is this system an important addition to the mobile market? Well, let’s start with the obvious. Bandai have identified a niche that’s not well served with current gaming hardware. By choosing a well established package style in a just-like-adult cell-phone shape, it’s already a must-have item for kiddies who want to be grown up (and don’t they all?).

Finally, the game has two facets that combine to make it a winner. The concept builds on the track-proven success model of collectable cards based on TV cartoon series — the aforementioned Pokemon — and the model allows for interactivity with different identities — like the aforementioned Tamagochi. In short, Bandai’s latest game has covered all the angles and we predict, without fear or favor, that it will make its way overseas just like its predecessors.